The Delta School District has been asked to track incidents of exclusion of students with special needs.
Jan 24, 2019 5:05 PM By: Sandor Gyarmati 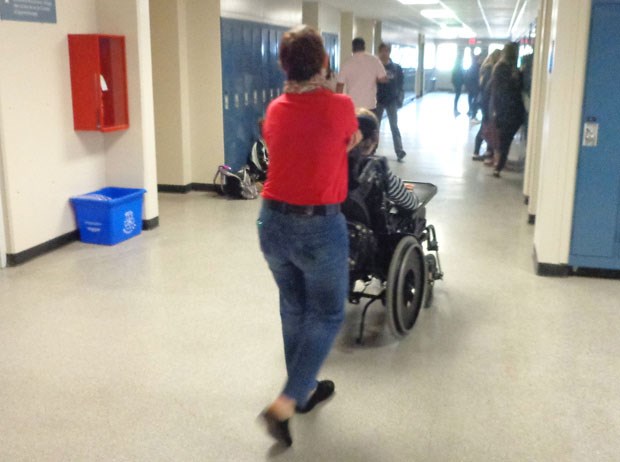 The Delta School District has been asked to track incidents of exclusion of students with special needs.

The Delta School District has been asked to track incidents of exclusion of students with special needs.

At a recent board of education meeting, Samanta Palomino, a parent of a child with Down syndrome, made the request in the hope the district can look at the data to find solutions.

B.C. parents have been using an online reporting system managed by advocacy group BCEdAccess to report incidents of exclusion, which can range from kids being asked to stay at home, being sent home, being dropped off late or picked up early by buses, being excluded from field trips, as well as being excluded from typical learning activities and sent to a resource or isolation room.

Palomino told the Optimist the goal is not criticize school districts but to help them better identify issues in order to put the supports in place that are necessary.

“We’re not looking for this to be confrontational or adversarial. We want this to be a collaborative, team-oriented data collecting tool. It’s to provide you with information that can provide you with awareness, and that awareness can lead you to problem-solving and creating something more functional that works for everyone,” she explained.

“One of the issues is EAs (educational assistants), from what I understood, they’re having trouble hiring them. There’s a collective agreement that an EA is placed based on seniority and not best fit… one thing I suggested is that we should be looking at how we can renegotiate this so that every district can do it differently. Richmond is a district that actually does use the best fit and Richmond is attracting people from this district to work there because of what they are offering,” added Palomino.

She said BCEdAccess has come with a series of other recommendations in consultation with parents.

The BCEdAccess website also has a letter from the B.C. Confederation of Parent Advisory Councils in late 2017 which states under the B.C. School Act every child in the province, regardless of ability, has the right to receive access to a fully funded public education.

A survey of over 800 parents of children with special needs, representing 51 of the 60 school districts in the province, done by the confederation found almost half of those who responded indicated their children were not allowed to remain at school for as long as other students on a daily basis.

The amount of educational time those children missed ranged from half an hour to over three hours daily, with 132 parents being told to keep their children home for more than half the school day every day.

Another significant concern was the number of days that special needs students are being told to stay home due to staff shortages and the lack of properly trained support. Yet another issue was children being sent home due to behavioural issues in what amounted to undocumented suspensions due to disability that can last for days or weeks.

“The BCCPAC survey results indicate that the concerns expressed by many families that their children with special needs are being denied their right to equitably access a full day of school are significant and systemic, resulting in hundreds of the most vulnerable students being denied many hours of education every year,” BCCPAC stated.