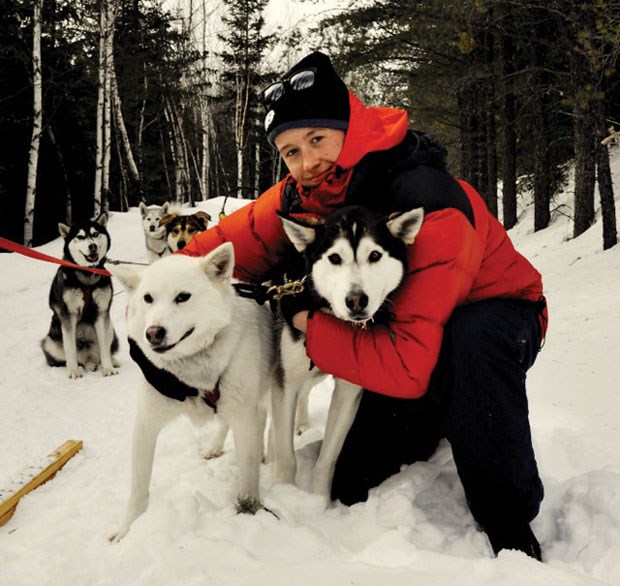 Nolan McLeod spent a week dog sledding in the Charlevoix region of Quebec.submitted

Mustering dog sleds in the snowy wilderness terrain of Quebec would be a challenge for most people, but after a three-year battle with cancer, it was a journey into self-confidence for Tsawwassen's Nolan McLeod.

Not only did the 18-year-old finish the arduous, week-long trek, he also gained a sense of newfound direction in his life.

McLeod was part of a dog sledding expedition organized by Quebecbased On the Tip of the Toes Foundation, which brought together young cancer survivors in remission from across the country from March 10 to 18.

The group learned to become mushers by leading packs of huskies from one log cabin to another in the Charlevoix region. The terrain was filled with powdery snow and they rocked their sleds in the uphill forests and downhill slopes.

Two professional mushers and a medical team, including a physician, nurse and social worker, helped guide the expedition.

McLeod said the trip was also a chance to share his cancer experiences with 13 other teens who could relate to the challenges associated with the disease.

"I feel it's a really important thing to do trips like that with other cancer survivors so that you can kind of normalize it," said the South Delta Secondary student.

Commanding the dogs was a big learning curve as he had to be strong and manage his words or else the dogs wouldn't trust him.

"You have to be confident because if you don't know what you're saying, the dogs are sure as hell not going to know," he recalled.

McLeod was diagnosed with acute lymphoblastic leukemia in May 2012. He had his last treatment in September 2015.

He said the treatments limited his physical activity, but being able to complete the expedition gave him a feeling of accomplishment and selfconfidence.

"You get out of survival mode, because that really is ultimately what [cancer] is," he said. "It definitely brings perspective and confidence into what you really should be doing when there's nothing to look at and compare yourself at that moment in time."

The foundation offers what it calls therapeutic adventures, an idea that started with Dr. Sylvain Baruchel in 1996. McLeod's trip was the foundation's 50th.

"Here they are, surrounded by people of the same age that have gone through a similar experience," said foundation general manager Jean-Charles Fortin. "They know what it is like to lose their hair and to feel weak, so they can finally speak freely, know that they will be understood and know that they are going to be accepted for who they are, no matter how healthy or not they are."

For McLeod, the experience in the wilderness allowed him to focus on himself and disconnect from outside distractions like his cell phone and social media.

On the last night of the trip, as the group gathered around a campfire roasting marshmallows, each member said one meaningful word to sum up their experience. McLeod chose perspective.

"I gained perspective on what I should be doing and recalled the hard times," he said. "When you have a great experience with people that have been through something similar, it kind of makes that stand out."

Upon his return, McLeod received additional good news that he had been accepted into the four-year co-op program at Gustavson School of Business at the University of Victoria.

"I just find it interesting and I want to dive into the leadership aspect, which I think it's cool to take on," he said.