Champions to be honoured

Delta Sports Hall of Fame committee will recognize recipients at gala this month
Oct 7, 2016 12:00 AM By: Delta Optimist 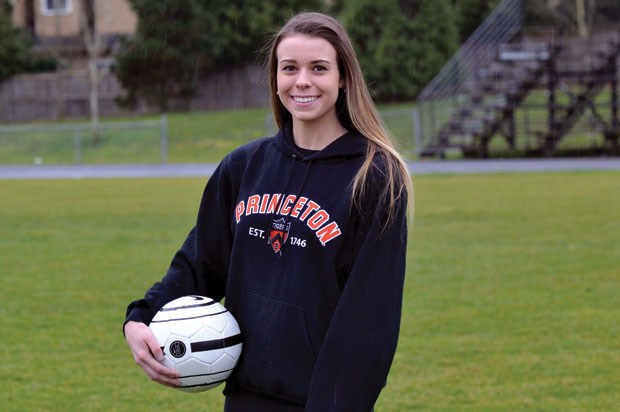 Soccer standout Olivia Sheppard is one of the 2016 Sports Champions who will be recognized this month at a gala banquet in Tsawwassen.

The Delta Sports Hall of Fame committee is recognizing excellence in and out of the field of play over the past 12 months with its 2016 Sports Champions recipients.

Winners in the various categories will be recognized at a gala banquet on Saturday, Oct. 22 at the Coast Tsawwassen Inn. Tickets are $60 and can be purchased by calling Delta Gymnastics Society at 604-943-0460.

Here are this year's Sports Champions:

Youth Athlete: Olivia Sheppard (soccer) Setting her sights high as a six-year-old, Sheppard dreamed of playing soccer at an NCAA Div. 1 school and for Canada. Sheppard was selected to Provincial Select squads for four years in a row. At the 2012 Canadian National Soccer Championships, the Tsawwassen resident earned the "Golden Boot" as top scorer. She was invited in 2015 as one of the inaugural members of the National EXCEL (REX) program designed to groom players for the Canadian Women's National team. This past year, Sheppard's hard work in both school and soccer paid off as she accepted an offer to play for Princeton University where she has established herself as a starter in her first year.

Athlete: Brendan Hodge (rowing) Motivated by Silken Laumann to take up rowing, he attended Harvard University. After the 2005 U-23 World Championships where his crew finished seventh in the lightweight men's fours (LM4), he "retired" from rowing to complete his law degree at UBC. After watching the 2012 London Olympics, the Tsawwassen resident knew he wanted to give rowing one more shot. His crews competed in LM4 in World Cup races and World Championships and won gold at the 2015 Pan American Games. Qualifying for Rio 2016, Hodge and his LM4 crew finished 13th. After two "careers" with an eightyear break in between, Hodge has retired from competitive rowing (again).

Athlete: Maxwell Lattimer (rowing) A Ladner resident, Lattimer began rowing at Vancouver College where he was selected to Team BC in 2006. He rowed for the University of British Columbia and was named the Canadian University Rowing Association's Male Athlete of the Year in 2013. That same year, Lattimer won three gold medals for B.C. at the Canada Summer Games. In 2014, he joined the senior national team where, a year later, his crew won gold at the Pan Am Games in LM4. At the 2015 World Championships his crew secured an Olympic berth for Rio 2016 where they would go onto finish 13th.

Master Athlete: Matt Yole (bowls) A seasoned athlete in lawn bowling at 87 years young, Yole had an outstanding 2015. A member of the Ladner Lawn Bowling Club for more than 26 years, Yole took up the sport upon his retirement. Currently past-president of the club, he has served his sport faithfully. In 2009, Yole's vision reached a point where he could only see one-third of the green. Rather than quit, he discovered blind lawn bowling and he hasn't looked back. Last year, he won the gold medal at the National Blind Championships.

Volunteer: Chris Roper (softball) Roper has been a dedicated volunteer in North Delta Softball for more than 20 years. Roper began coaching in house league, continuing on to coach the ND Lightning "Rep B" team for more than 12 years and in 2013 adding the "Rep A" Delta Heat team which he continues to coach today. His Lightning teams won two provincial gold medals and three provincial bronze medals during his tenure. He served as president of ND Softball for more than 16 years and in 2013 he added the role of president of the Delta Heat "Rep A" fastpitch association to his responsibilities.

Team: Midget A1 Delta Islanders (lacrosse) Delta Islanders players and coaches have been successful for many years but on different teams. The 2015 merger of the Delta Islanders and the North Delta Hawks and the training provided at the Delta Lacrosse Academy at DSS established the foundation for this team. Everything came together for them in 2016. Coached by Steven and Darron Alexander, Tanner Taylor and Chris McCluskie, they won the silver medal at the U-15 field lacrosse Provincials in February. In July, the team won the Provincial A1 Midget Box Lacrosse championship. This team also serves the community by raising money and volunteering for the Delta Islanders cancer fundraiser and refereeing with the club.

Coach: Cory Philpot (football) A well-known figure in the football community having played and won the 1994 Grey Cup as a member of the B.C. Lions, Philpot has built a legacy through his post-CFL contributions to the community. Through his organization All Star Youth Sport, he works to provide opportunities for athletes, regardless of their economic ability, to participate in sports. Inspired by his mother Lily, Philpot has given countless hours to North Delta Community Football, as chair of Football Canada's noncontact committee and with football operations in B.C. He led his U-16 B.C. All-Star Youth Flag Football team to a 2016 national championship.

Coach: Brent Calvert (football) For over nine years Calvert has been a fixture with South Delta Rams community football as a coach. He has given countless hours of volunteer time to coaching, leadership, training and administering football programs. His teams have achieved success under his guidance, having gone undefeated in the Junior Bantam and Bantam divisions.