It was a daunting task last week when a young Delta Pacers squad opened its senior girls'high school soccer season against Elgin Park.
Apr 12, 2017 12:00 AM By: Ian Jacques 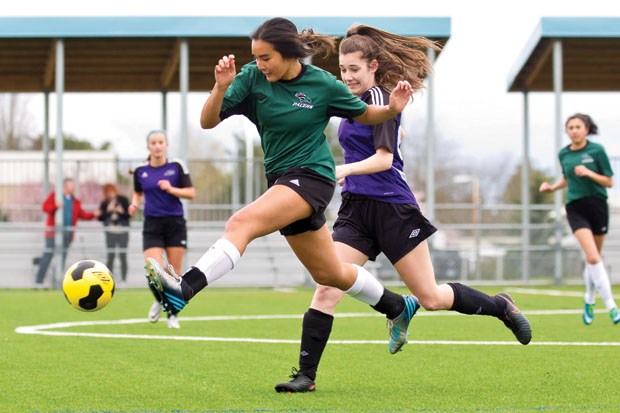 It was a daunting task last week when a young Delta Pacers squad opened its senior girls'high school soccer season against Elgin Park.

And despite a 2-0 loss, Delta played well against the Surrey school that is one year removed from a fourth-place finish at the provincials and will likely be among the contenders again this season.

The opening minutes at Dugald Morrison Park saw a pretty even match, with neither side gaining much of an advantage.

About 20 minutes in, though, Elgin found a break in the Pacers'defence that saw a forward pick up a loose ball and neatly place a shot by Delta's keeper for a 1-0 advantage.

That score line held until early in the second half when Elgin was able to get a good break off a goal kick down the sidelines where a cross was sent into the box and two Elgin strikers were on hand to finish the play for the insurance marker.

"I would say they [Elgin Park] are one of the better teams. They pass very well. They have a great keeper. For us to go down 2-0 is not a bad game at all," Kinneston said. "I thought the girls played with a lot of grit, a lot of class and hustled. They are all new girls playing with each other, so given that, I think it was an excellent game."

This year's Pacers'squad features a mix of players from grades 9 to 12 with some playing house league soccer, while others play on high performance academy teams outside of their high school commitments.

"It's a young team and today was really the first time they all played together," she said. "And as it's the juniors playing with the seniors, it is also a great opportunity for the seniors to be leaders and for the juniors to move up to those senior positions eventually."

Kinneston said her goal is for the team to play well, practice their skills and to be able to compete every game.

"I think we can compete with the other teams. I think we showed that today," she said. "We were missing about four or five players, so that was a big miss, although the girls that filled those spots certainly did well."

Delta played another strong game Monday afternoon despite dropping a 1-0 decision to Seaquam.

The Pacers hit the road today for a game in North Delta set for a 3:30 p.m. kick-off at Delsom Turf.