Memory of friend drives Tsawwassen baseball player to next level 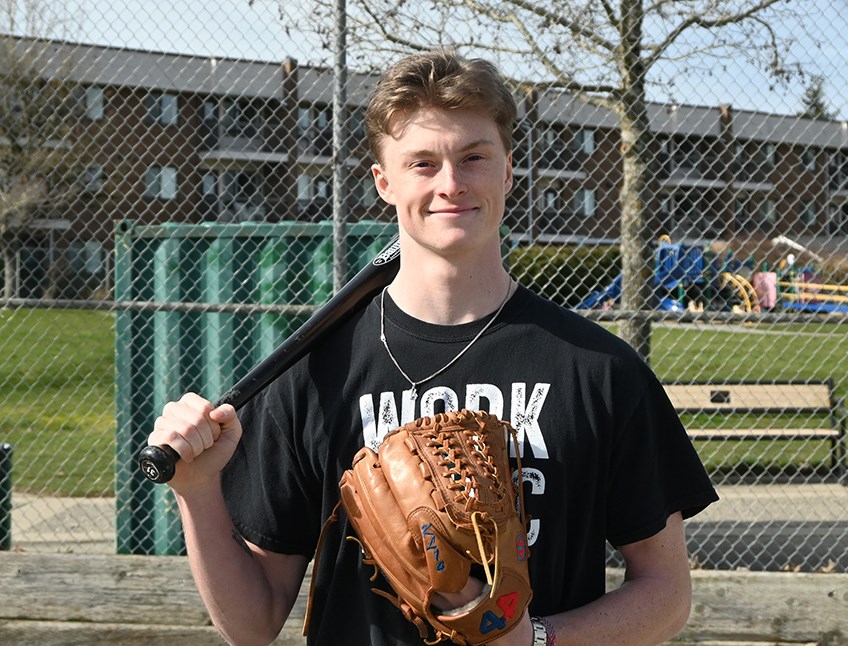 Tsawwassen's Nate Rosser is headed to one of the top junior colleges in California next fall. He has dedicated his baseball career to his friend and former teammate Kyle Losse, who passed away in January 2018. Mark Booth/Delta Optimist

Nate Rosser is heading to one of the top junior college baseball programs in California and he credits his close friend for providing the motivation to get him there.

The Tsawwassen pitcher has committed to Ohlone Junior College in Fremont where the plan is to continue his promising development and eventually transfer to a NCAA Division One program. The 6-foot-4 right-hander currently plays for the B.C. Premier Baseball League’s North Delta Blue Jays after coming through the Delta Tigers and Tsawwassen Amateur Baseball programs.

“The biggest thing for me was going to a school that was in a good area and can develop me well and move me onto to a four-year school,” said the Grade 12 South Delta Secondary student. They are the No. 1 school in California. Their coach has a reputation for developing players. I also want to play professional baseball and he has a lot connections for that too.”

Doing it all for Kyle

Pushing Rosser along the way has been Kyle Losse, his close friend who tragically passed away from complications of a stroke back in January 2018 at just 14.

The pair shared the same passion for the game and were nearly inseparable after being teammates for the first time at the Mosquito Division age.

“We were very similar in that we were tall and athletic. I was always just a little bit better but he was also a year younger than me. It was amazing,” smiled Rosser. “We would just go to the park and hit for three hours or we would throw. We probably spent 90 percent of our time together for a couple of summers anyways. There were lots of sleepovers too.”

Rosser was on holidays celebrating his 15h birthday with his family when he learned Losse had passed away.

“When it first happened I didn’t believe it. It took a while for it set in. It was hard. Most people didn’t know him as well as I did,” he continued while standing on Field #14 at Winskill Park that is now named and numbered after Losse. “We probably played 100 games on this field together.  He would be on my team right now. I know it. It’s still hard to think he is not here playing with me. Everything I do in baseball now I always think about him.”

Rosser had Losse’s initials and number embroidered on his glove.  He will also be adding a second tattoo soon in memory of his friend. The family presented him with Kyle’s favourite bat and Rosser helped design the MVP glove for the inaugural Kyle Losse Memorial Tournament, held back in 2018 at Winskill.

He knows his friend would have been excited for the next chapter of his career.

“Nate all your hard work has paid off, we are looking forward to seeing you on the field at Ohlone College,” said Kyle’s parents Niki and Brian Losse. “We are honored that Kyle continues to be an inspiration to you and are so proud of your accomplishments. It’s always been our goal to inspire future athletes to continue to chase their dreams to the fullest – just like Kyle would have."

The opportunity at Ohlone came after Rosser headed east last fall amid the pandemic to pitch for the Mississauga-based Ontario Blue Jays that participated at the World Wood Bat Championships in Florida. He has also made steady progress since working with pitching coach Eric Ruben, whom he met a couple of years ago at Big League Experience Camp.

“He has changed everything for me. My fastball jumped like 8-mph in velocity,” Rosser added. “My mechanics were a mess because I didn’t know how to use my body properly. He has helped a lot with that and everything I do now is working out is to help my pitching. I pretty well stick to the fastball, curve and change-up. At the end of the day they are my three best pitches.”

He hopes to showcase his repertoire back on the mound for North Delta this spring when provincial health COVID-19 restrictions are eased enough for games to be played.