An unexpected contender to play on Bo Horvat's right wing has stepped up to the plate.
Jan 4, 2021 4:19 PM By: Daniel Wagner 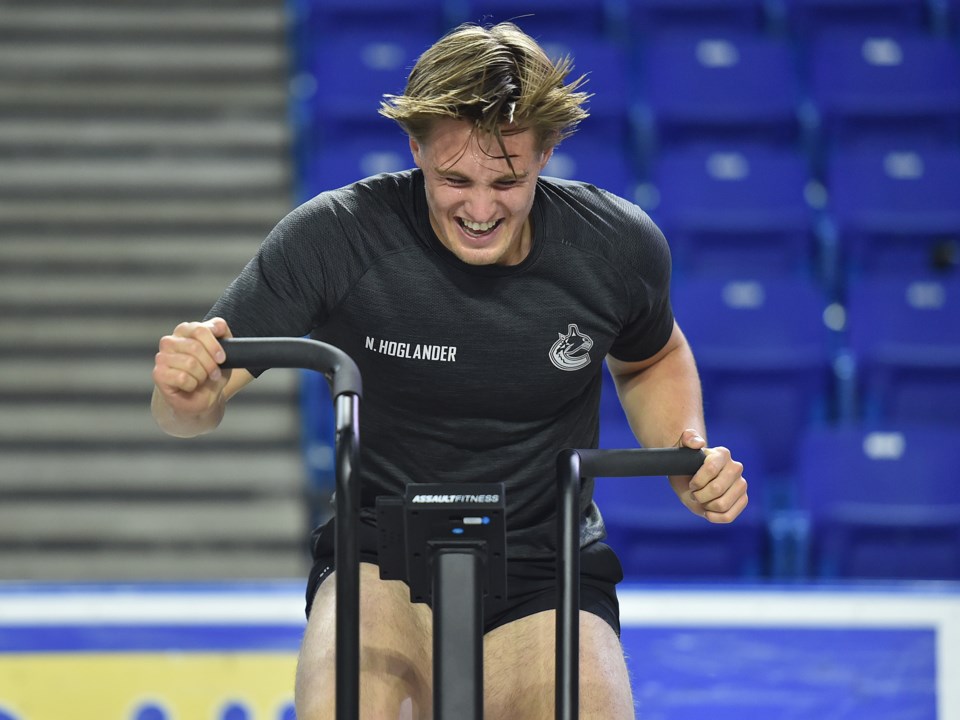 The biggest battle at Canucks training camp will be on the right wing and an unexpected contender stepped up on the first day of practice.

While Brock Boeser’s spot on the top line with Elias Pettersson and J.T. Miller seems safe, it’s entirely unclear who will play with Bo Horvat and Tanner Pearson on the second line. They have a few different options on right wing, such as Jake Virtanen, Jayce Hawryluk, Zach MacEwen, and Loui Eriksson.

On Monday, none of them were on a line with Horvat and Pearson. Instead, a young left-winger was shifted to his off side to see how he might fit in a top-six role: Nils Höglander.

The 20-year-old Höglander was drafted by the Canucks in the second round of the 2019 draft and has since played in the Swedish Hockey League in bottom-six minutes. Getting a top-six shot with the Canucks immediately would be quite the jump, but head coach Travis Green has shown a willingness to throw young players directly into the fire.

When Pettersson stepped into the Canucks lineup after a full season in the SHL on the wing, Green didn’t hesitate to put him at centre. In the first game of his rookie season, Quinn Hughes played over 23 minutes while matched up directly against Connor McDavid. When Green feels a rookie is ready, he’s willing to give them an opportunity.

Green also made it clear that the line combinations the Canucks are trying at training camp are not idle experimentation. There’s no time to experiment: they only have ten days of camp before the puck drops on the season.

“We’re going to try a couple of different combos,” said head coach Travis Green. “We’ve got to make decisions, we’re not just out there to skate and condition, we’re out there to see how combinations look.”

That means there’s a legitimate chance that Höglander doesn’t just start the season with the Canucks but immediately plays on the second line. He’ll have competition for the job, but one thing might give him a leg up: he’s already up to speed after playing half a season in the SHL.

Where some players are entering training camp with just some practice skates with teammates under their belt, Höglander has already played 23 games this season and his confidence is high after 14 points in those games. He’s prepared to hit the ground running.

Höglander was definitely surprised when he saw who he would be lined up with at practice, but he knows he has a limited amount of time to make a good impression.

“When I first saw it, I was a little bit nervous,” said Höglander. “It's two really good hockey players and good guys...It’s a fast camp, we don’t have that many days to do the best. I just do the best and see what happens.”

The nerves didn’t show on the ice. He was quick on his skates, particularly with his lateral movement. It’s not just that he didn’t look out of place alongside Horvat and Pearson — he looked like he belonged with them.

“I didn't know too much about him,” said Horvat. “I just saw him play World Juniors and a couple TSN highlight reel goals, but to actually skate with him today was was really good. He's really fast, shifty, smart with the puck.”

It’s just training camp, of course. They’re just drills and not at the same level as an NHL game against legitimate opposition. With no exhibition games, the Canucks won’t have a chance to see how Höglander stands up against NHL competition. With the edge he’s shown in SHL games, he certainly won’t be intimidated despite his smaller size.

The job isn’t necessarily Höglander’s to lose, but the fact he’s even in the running shows the confidence the Canucks have in him as a prospect.

Canucks prospect Arvid Costmar named one of Sweden's top-three players as they're knocked out of 2021 World Juniors
Jan 2, 2021 6:10 PM