Rep hockey team continues to work on skill development while giving back to the community
Jan 18, 2021 7:00 PM By: Mark Booth 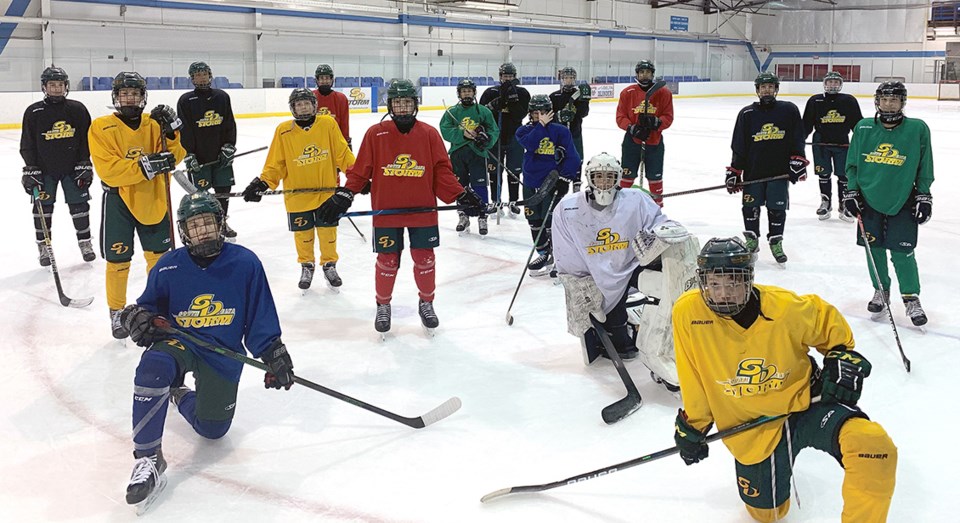 South Delta Minor Hockey's top Bantam team continues to work on skill development while contributing to the community off the ice as well. Submitted

The South Delta Bantam A1 Storm have turned a potentially trying hockey season into a positive one by making a difference in its community.

South Delta Minor’s top team for 13-and-14-year-olds had played just four cohort games when new COVID-19 provincial health restrictions halted its schedule back in November. The hope is they can resume playing next month, but five tournaments have been lost along the way including the opportunity to host the Tim Jardine Showcase.

Head coach Chris Erhart and his staff have approached the campaign as a unique opportunity beyond the rink. The team’s mission statement “be phenomenal or be forgotten” is what the players cheer out at the start of every practice.

“Our program is not only about great hockey players working towards improving and moving onto higher hockey opportunities, but we have really focused on being great people, especially in our community,” Erhart explained.

The team collected donations for the South Delta Food Bank back in the fall and just wrapped up a Christmas tree collection campaign that raised $660 for the BC Children’s Hospital. What has really impressed Erhart is his players taking charge of these projects.

“They are driving it. We recommended it at the beginning of the season but the players are driving them now,” he continued. “They are the ones that are chomping at the bit of saying what we can do next for someone. They collectively, as a group, chose B.C. Children’s Hospital as the charity they wanted to support.”

On the ice, the coaches are doing their best to provide a variety of training sessions, that have already included outsourcing power skating and goaltending sessions. A shooting clinic is up next with local instructor Ron Johnson. Erhart also launched a 3-on-3 COVID Cup that will now be a monthly competition among the players. Some practices have been live streamed with invitations sent out to junior scouts.

“We have a really good group this year. They are almost like a well-oiled machine. They show up and they work hard. I think for them it’s a great escape to get to rink work hard, have fun and see their buddies,” said Erhart.

“As team staff, it’s been tremendous to watch each player’s resiliency in adapting to the ever changing (provincial health order) while maintaining an eagerness to continue working at the sport they all love.”

Erhart also praised the contributions of assistant coach Cavin Tilsey. The SDMHA and BC Hockey League alumni not only is passing on his knowledge but serves as a young role model of what the players are striving for.