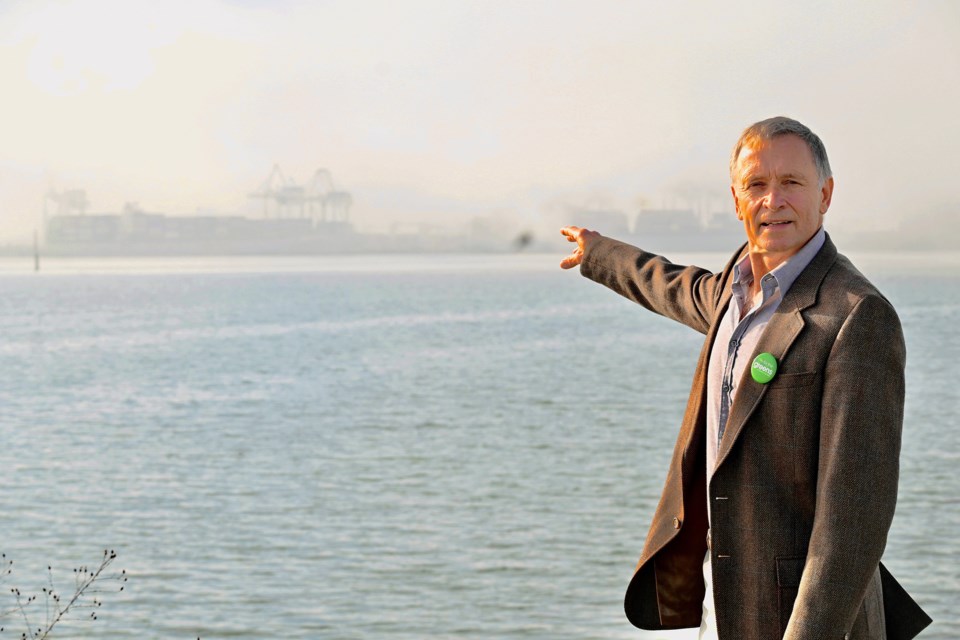 Resident Peter van der Velden, pictured here when he was a candidate for the Green Party in last October's provincial election, writes that a peer review of all Port environmental impact information of the T2 plans should be done.Optimist file

It’s surprising to see that Robin Silvester, CEO of the Port of Vancouver, continues to get the kind of press coverage he does (Turning off the pause button, Optimist website).

The Port has never been able to meet its container growth projections and has changed its plans continually to try and justify the T2 port expansion.

Delta Port container growth will continue to be slower than Prince Rupert. Rupert has a two-day shorter sailing time from Asia and shipping cross country from Prince Rupert is more economical. As a result, Prince Rupert is building a port extension that will adequately serve West Coast container needs.

The only growth seen in Delta is that of American containers. These bring little value to the Port or the economy. This growth will stop when the US dollar values down as it does in economic cycles.

It is a documented fact that the T2 expansion will harm biofilm production and damage the Sandpiper population irreversibly. Canada has signed international agreements to ensure that migrating species be protected. The Southern Resident Killer Whales and the Fraser River Chinook will also be affected by the construction of T2.

We may well need future infrastructure projects. It certainly is true that these projects need to be ‘green’ as Mr. Silvester states. To consider T2 a ‘green’ project or a ‘critical’ project is basically not an accurate presentation of fact. T2 was planned almost 20 years ago. As a result, the Port is reluctant to consider canceling this project. Even though the lacking container growth and environmental considerations both warrant just that.

In light of the Federal recognition that we are in a ‘climate emergency’ it would be prudent if not expected that the Port environmental science be reviewed by peers. Scientists not paid by the Port nor encumbered by political pressures. This would hold especially true for the ‘additional information’ the Port has been requested to supply. A number of scientists disagree with much of the science the Port has produced. Sadly, last year, we also saw the government’s own scientists muzzled from supplying damaging information to the final Review Process Report. Information that would surely have halted this project.

If Mr. Silvester truly believes in the environmental expertise of Port scientists, he should have no problem in agreeing to a peer review of all Port environmental impact information of the T2 plans.