The proposed KRPI radio towers proposed just south of the border in Point Roberts pose real health concerns for both Tsawwassen and Point Roberts residents.
Jul 31, 2015 12:00 AM By: Delta Optimist 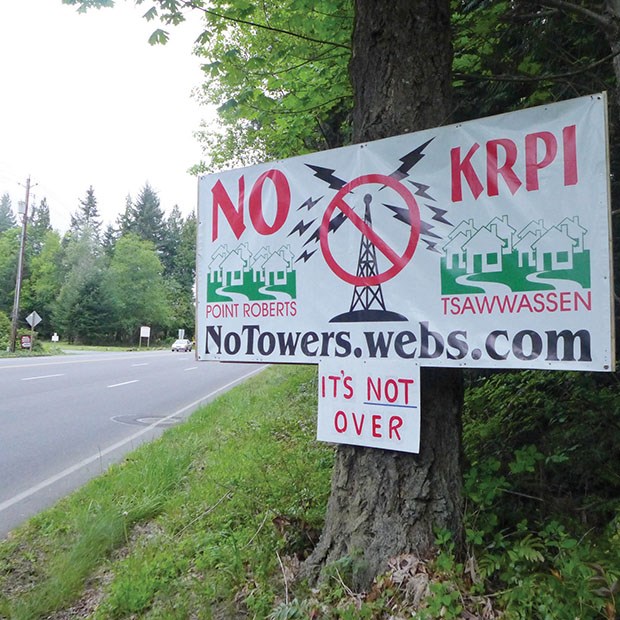 The battle over radio towers in Point Roberts has made its way to Skagit County Superior Court. BBC Broadcasting's appeal of Whatcom County council's rejection of the proposal begins Wednesday.

The proposed KRPI radio towers proposed just south of the border in Point Roberts pose real health concerns for both Tsawwassen and Point Roberts residents. In reality, we are facing a public health risk for our children, our grandchildren and ourselves.

Many people are under the impression this battle has been won. It has not. So far we have spent over $150,000 US in this very expensive legal battle, first at the Whatcom County level and now in Skagit County Superior Court, where BBC Broadcasting Inc. (the owners of KRPI) are appealing Whatcom County's denial of permits to construct the towers.

We fully expect KRPI, should it lose this appeal, will continue to the next level in state and possibly federal courts. We can continue this vital, protracted battle by Tsawwassen and Point Roberts citizens donating money to pay our very competent lawyers who have already won before the Whatcom County hearing examiner and then the Whatcom County council, which unanimously upheld the hearing examiner's decision.

We take for granted our quality of life and health. We must protect it, but to do so we need your continued support. KRPI's owners are hoping we will tire, that we will run out of funds and that they will win by attrition, by exhausting us and by draining us.

We believe this crossborder community is too strong and resilient for that to happen, but without everyone's help, it just might. And, if it does, we and our children and grandchildren will suffer the consequences.

We are all in this together. If every household donates a little, that adds up to a lot.

A number of epidemiological studies have concluded that proximity to AM radio towers increases the risk of developing childhood leukemia. One study concludes there was an "increased risk of lymphocytic leukemia among children with higher levels of exposure to radio frequency radiation from nearby AM radio broadcasting (stations) than among children with lower levels of exposure."

We estimate the risk zone will reach all the way to Highway 17A and possibly beyond. We must protect our pregnant mothers and 4,000 children who are more vulnerable to electromagnetic radiation (EMR). Recent cellular research has shown that our DNA suffers breaks in its strands with continuous exposure to EMR. M. Blank, PhD, a leading researcher in cellular research, cautions:

"Continuous exposure to EMR would predispose an individual to the accumulation of DNA damage and the development of cancer."

Our bodies are not adapted to withstand prolonged exposure to EMR. If the proposed KRPI towers are built, we will be subject to powerful 50,000 watts of EMR, 24 hours a day, seven days a week for as long as the towers are operational.

This invisible but highpowered constant wave of EMR will travel through the air and four metres into wet soil. Alarmingly, this EMR penetrates our bodies. In May, 202 world scientists from 40 countries issued an appeal to the UN and WHO calling for protection from non-ionizing electromagnetic field (EMF) exposure. These scientists list the EMF effects as: "increase in harmful free radicals, genetic damages, learning and memory deficits, neurological disorders, structural and functional changes in the reproductive system and negative impacts on general well being." These health impacts can not be allowed to happen to us and our families.

We must protect our health and way of life. Please donate at notowers. webs.com or send a cheque to PRTA-FTT, P.O. Box 158, Point Roberts, WA, 98281. We are all grateful for your financial support.

The website also contains references for the scientific studies.

Beverly Alder is a member of the Cross Border Coalition to Stop the Radio Towers.