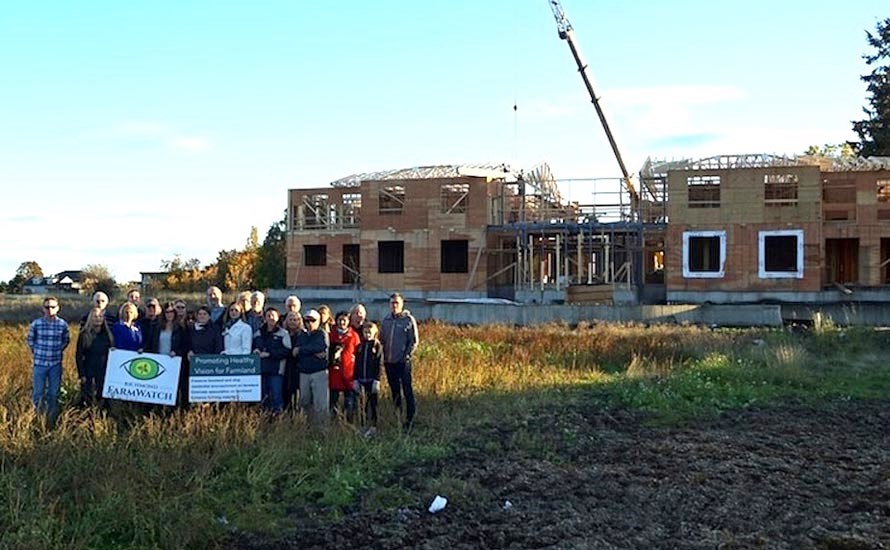 Farmland in Richmond, B.C.: 26 acres for $8.3 million (based on zoning to allow residential building). | Richmond Farmwatch

A newly built, farmland mega-mansion, owned by a shell company, has driven the 26.6-acre lot it sits on from an assessed value of $88,000 to $8.3 million – equal to more than $312,000 per acre – underscoring the impact such large homes are having on prices in Richmond’s Agricultural Land Reserve (ALR).

Meanwhile, on the Prairies, investors are kept at bay by legislation that restricts non-residents and even local pension funds from owing farmland, and maxiumum per-acre prices are approximately $3,300.

Laura Gillanders, a Richmond resident and member of Richmond FarmWatch, said the lot is one of many that have rocketed in value in the past year.

“One by one each of these farms is being taken out of production and making sure it is never farmed by a farmer who can live on that land,” said Gillanders.

“It goes to show these mansions are not being built for farming,” she added.

The home on No. 2 Road is still under construction. According to BC Assessment, once it is complete, it will be among the top 10 most-expensive properties in Richmond. BC Assessment also delisted the property from farm classhich would have reduced its taxes.

Gillanders said the land could be leased to a farmer but there are many obstacles to doing so, in an already competitive market place. Richmond city council has grappled with the issue of house sizes on and off for over a year now.

Notably, on February 23, 2017, City of Richmond staff issued the 11400 No. 2 Road building permit, which was one of dozens quickly processed after a motion to temporarily limit ALR houses to 7,500 square feet was rejected by council last January.

“We’re going to lose a lot of properties in the meantime. There will probably be a rush to build 11,000-square-foot homes,” said Gillanders.

Critics say that, due to speculation, Richmond’s agricultural land is under the worse threat since the ALR was created in 1973.

Richmond FarmWatch is calling on the immediate implementation of the 20 per cent foreign-buyer tax on the ALR in Metro Vancouver.

British Columbia is the only province that has no restrictions on foreign ownership of farmland.

Saskatchewan, after seeing large pension funds, including the Canada Pension Plan, gobble up farmland in the province, has banned non-Canadian investors and pensions from purchasing farmland.

Investor buying became common and many of the farmland purchases between 2010 and present day have been investor purchases.

“I see approximately 60 per cent of my buyers being investors,” said Ted Cawkwell, an agriculture specialist with Re/Max in Saskatchewan.

“Although investors are buying at a fast pace, only 2 per cent of the farmland in the province is owned by investors today,” he said.

The price of Saskatchewan farmland varies widely depending on location, soil conditions and other variables, but Cawkwell figures it ranges from $800 to a maximum of $3,300 per acre.

“If this regulation were ever to be relaxed, land values would climb at unprecedented rates as pension plans, Asian money and countless others would gobble the land base up quickly. The demand is there; it is only government regulation that is holding this back,” he said.

Non-Canadian individuals and corporations can apply to the Manitoba Farm Industry Board for an exemption if they wish to acquire an interest in more than 40 acres. The board considers factors such as the public interest, the potential benefit to Manitoba and the specific circumstances of the applicant.

In Alberta, non-Canadians and foreign-controlled corporations can own only up to two parcels of land, which cannot exceed 20 acres in total, but some exemptions are allowed.

The legislation, as in the rest of the Prairies, does not affect the ability of Canadian citizens or permanent residents to buy agricultural land in the province.