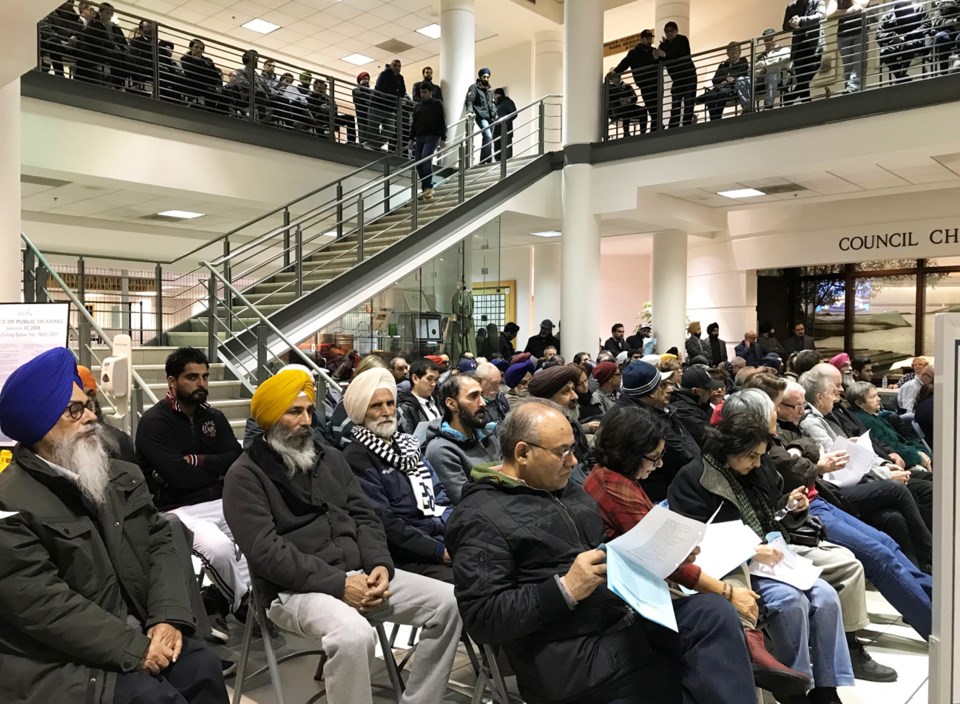 Municipal Hall wasn’t able to accommodate any more people after reaching capacity at a public hearing Tuesday where most of the speakers were strongly opposed to a zoning overhaul.sandor gyarmati

That was the complaint several residents raised about Delta’s proposed zoning bylaw changes at a public hearing on Tuesday.

An overflow crowd showed up at Municipal Hall with most vehemently opposed to the new regulations they argue will adversely limit what they can do with their properties, impact property values, while failing to address housing affordability.

To address street parking complaints, the regulations include secondary suites only being permitted on lots at least 15 metres (49 feet) in width. It’s a policy that’s been in place for a couple of years but not formally written into the bylaw yet. Planning director Marcy Sangret said that of all the single-detached properties in Delta, 91 per cent are 15 metres or more and, if all regulations are met, could potentially accommodate a secondary suite.

Also in the new bylaw, secondary suite parking would not permitted within a front yard but only the side or back, and a one-metre (three foot) setback from a neighbour’s lot line would be required for parking spaces. Also, there’s a requirement for two enclosed parking spaces for the principal residence with a suite, a requirement that wouldn’t apply to dwellings constructed before July 2010.

Another contentious change includes the minimum lot length for the smallest house moving up from 11 metres (36 feet) to 12 metres (39 feet), which many complained will potentially reduce the number of subdivisions.

Saying there’s a disconnect between council and the North Delta community, several suggested it's discriminatory South Delta currently doesn’t have the same rules when it comes to caps on house sizes.

One homeowner claimed North Deltans are “being treated like second-class citizens.”

Sangret, who responded to a series of issues raised during the four-plus hour hearing, had to answer whether Delta’s regulation was constitutional, saying the city has the ability to set policies as long as they have clarity and consistency.

She acknowledged the house cap for the same size lot is different in North Delta compared to the south, also noting North Delta new home development goes through a design review process.

She explained the cap is not new but a provision that’s already been in place for years in the current bylaw. She noted when it was introduced, smaller homes on large lots in North Delta were making way for much larger houses, drawing concern from neighbourhoods at the time. Until the cap was imposed, property owners could build up to a certain percentage of lot sizes, which meant much bigger houses on those large lots.

As far as the new zoning, the changes, which prompted petitions and hundreds of letters, drew some raised voices Tuesday.

The sky was falling in North Delta due to big houses, now it’s falling because of small ones, complained one resident.

“Increasing the lot width will close the door for hundreds of families. This just isn’t right,” said another resident. “People also won’t have an affordable place to live in Delta and people won’t be able to buy a house because they can’t have a secondary suite to help pay the mortgage.”

Homeowner Gurjit Dhillon noted “a middle ground” should be worked out.

Concern was also raised about restrictions on the size of accessory structures.

Several North Delta residents, however, spoke in favour of the regulations, saying street parking has already become a problem and trade-offs are required in order to have neighbourhood livability.

One resident noted many are in support, despite the petitions circulating, while Firth Bateman said the petitions seem to focus on people wanting to maximize the profitability of their houses with no regard to neighbourhood livability.

Councillors had a few questions including Bruce McDonald who noted he didn’t understand why additional parking shouldn’t be allowed in the front.

The public hearing wrapped up late Tuesday with council deciding to have a special meeting next Monday evening, Feb. 5, at 7 p.m. to discuss where to go with the bylaw.