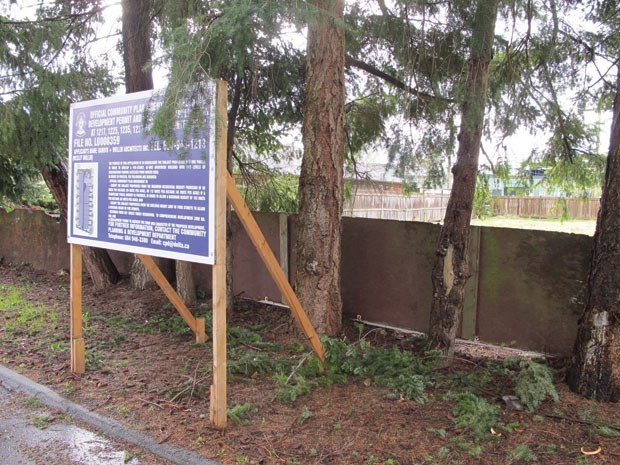 Hunter Road residents say they are not happy with a five-storey, 52-unit apartment building proposed for their neighbourhood.Ian Jacques

A proposed apartment building on Hunter Road in Tsawwassen is already getting the thumbs down even before the application has gone to Delta council for discussion.

The proposal, currently in the hands of Delta planning staff, calls for a consolidation of properties into one parcel to develop a five-storey, 52-unit apartment building with two levels of underground parking.

Resident Brenda Casey, who lives in one of five four-storey condo buildings that line the east side of the road (single-family homes line the other side where the development is proposed) says the proposal is out of character for the neighbourhood and brings with it many traffic and safety concerns.

“Many other residents are very much opposed to this particular development. I have written letters to the City of Delta and so has my strata council. This is an unnecessary and unwanted building,” Casey said. “I know another resident in one of the other condos held a meeting late last year and every resident that came out was opposed to this.”

She said the condo buildings that are there already have been placed in a considerate manner amongst the individual homes along the tiny cul-de-sac, but said what is being proposed is way out of character for the neighbourhood.

“Kids play along the street, people walk and walk their dogs. I’m in a wheelchair and I feel very safe in the neighbourhood,” she said. “A five-storey building does not seem to be feasible with two levels of underground parking. All of that traffic trying to get into the underground parking on our tiny cul-de-sac with limited parking on the street and only one side with a sidewalk seems very unsafe and foolish.”

Casey said what she would like to see is more attractive little townhouses that people, especially young families, might be able to afford.

“A five-storey building is just out of character for not only our neighbourhood, but for all of Tsawwassen,” she added. “This is not in balance with our official community plan.”

Delta’s director of community planning and development Marcy Sangret said the proposal is still under review and has not yet been presented to council for consideration.

Sangret said a public information meeting about the proposal will be scheduled, which will give an opportunity for residents to learn about the project and provide feedback.

A date has not yet been set for that meeting.