Battered by criticism that the 2020 census was dangerously politicized by the Trump administration, the U.S.
Jan 21, 2021 7:40 PM By: Canadian Press 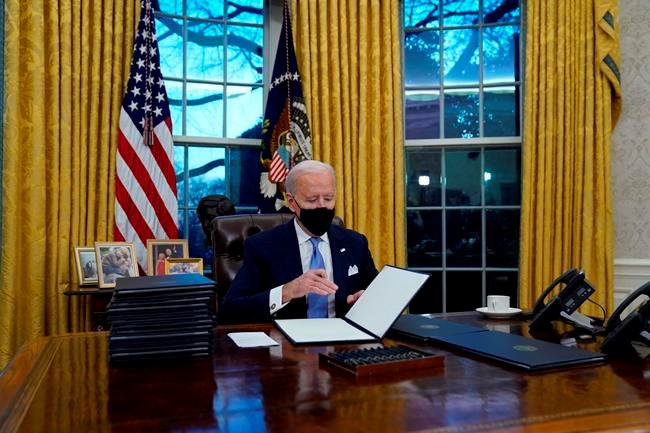 Battered by criticism that the 2020 census was dangerously politicized by the Trump administration, the U.S. Census Bureau under a new Biden administration has the tall task of restoring confidence in the numbers that will be used to determine funding and political power.

Picking up the pieces of a long, fractious process that spooled out during a global pandemic starts with transparency about irregularities in the data, former Census Bureau directors, lawmakers and advocates said.

They advised the new administration to take more time to review and process population figures to be sure they get them right. The high-stakes undertaking will determine how many congressional seats and Electoral College votes each state gets as well as the distribution of $1.5 trillion in federal spending each year.

“We are optimistic that things at the Census Bureau will be better. The question is whether the damage caused by the Trump administration can be rectified,” said Marc Morial, president and CEO of the National Urban League. Morial’s organization, along with other advocacy groups and municipalities, sued former President Donald Trump's administration last year over a decision to end the once-a-decade head count early.

According to critics, that damage includes a failed effort to add a citizenship question to the 2020 census questionnaire and a Trump order to figure out who is a citizen and who is in the U.S. illegally. They say another Trump directive to exclude people in the country illegally from the apportionment of congressional seats, shortened schedules to collect and process data, and four political appointments to top positions inside the bureau also threatened the count’s integrity.

Census workers across the country have told The Associated Press and other media outlets that they were encouraged to falsify responses in the rush to finish the count so the numbers used for determining how many congressional seats each state gets could be produced under the Trump administration. Census Bureau officials said such problems were isolated.

Census advocates were heartened Wednesday by President Joe Biden's quick revocations of Trump's order to produce citizenship data and the former president's memo attempting to exclude people in the U.S. illegally from the apportionment count. The Biden administration also has pledged to give the Census Bureau the time it needs to process the data.

The Census Bureau also said Thursday that redistricting data it's releasing later this year for states and municipalities to use in creating legislative districts won't include information on citizenship or immigration status. It also said the agency is suspending all work on trying to produce the immigration status of U.S. residents for the census.

“President Biden’s swift action today finally closes the book on the Trump administration’s attempts to manipulate the census for political gain," said Dale Ho, director of the ACLU’s Voting Rights Project, who argued against the legality of the apportionment memo before the Supreme Court last year. The high court ruled that any challenge was premature.

After the bureau missed a year-end deadline for turning in the apportionment numbers, it said the figures would be completed as close to the previous deadline as possible. Trump administration attorneys recently said they won’t be ready until early March because the bureau needs time to fix irregularities in the data.

There will be flaws, likely undercounts of communities of and overcounts of whites, but “they will just have to ‘bake the best cake possible’ through identifying and correcting the errors they can find,” said Rob Santos, president of the American Statistical Association.

Trump’s four political appointments to the Census Bureau last year were denounced by statisticians and Democratic lawmakers worried they would politicize the once-a-decade head count. The Office of Inspector General last week said two of them had pressured bureau workers to figure out who is in the U.S. illegally before Trump left office, with one whistleblower calling the effort “statistically indefensible.” Then-Census Bureau Director Steven Dillingham ordered a technical report on that effort but halted it after blowback. He resigned this week after Democratic lawmakers and civil rights groups called for his departure.

The bureau’s new interim chief, Deputy Director Ron Jarmin, didn’t respond to a request for an interview. He will report to Biden's new pick to head the Commerce Department — which oversees the Census Bureau — Rhode Island Gov. Gina Raimondo.

Former Census Bureau Director Kenneth Prewitt said he’s optimistic the final product will be as accurate as past censuses, especially now that Jarmin is at the helm.

“They know how to do it right. It just takes time,” said Prewitt, who served in the Clinton administration.

Another former bureau director, John Thompson, said the exit of Trump’s appointees will help eliminate distractions to finishing the 2020 census, but the agency needs to hold a public forum to discuss what anomalies bureau statisticians have found in the data and what they’re doing to fix them ahead of the apportionment numbers being turned in.

U.S. Sen. Brian Schatz, a Democrat from Hawaii, asked Biden to set up a nonpartisan commission to review the apportionment data to make sure it’s fair and accurate before it’s delivered to the House of Representatives.

“The Census Bureau faced a number of challenges with the 2020 Census,” Schatz said in a letter. “Some, like the pandemic, were beyond the agency’s control. However, the Trump Administration actively interfered with the agency’s operations.”

Despite facing pressures from their political bosses, the Census Bureau’s career staff did a good job of resisting the Trump administration’s most questionable orders by coming forward when they found errors in the data without worrying about the deadline and by whistleblowing to the inspector general when they felt pressured to produce citizenship of dubious accuracy, according to Morial, Santos and Thompson.

“They deserve to be ,” Santos said.

This story has corrected the first name of Rob Santos, instead of Ron Santos.

Myanmar police deploy early to crank up pressure on protests
Feb 27, 2021 2:15 AM
Comments