Residents and businesses have stepped up to make upgraded venue a reality
Apr 22, 2021 10:00 AM By: Mark Booth 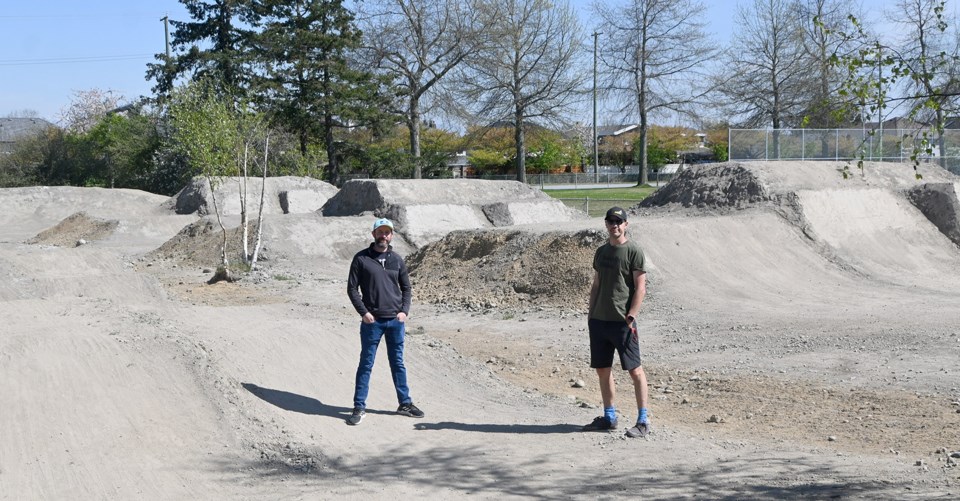 National BMX head coach Adam Muys is impressed with the community spirit in Ladner that has led to a significant makeover of the Holly Park Pump Track.

Muys, who is soon off to World Cup competitions in Italy and Columbia as Canadian riders prepare for the Summer Olympic Games in Toyko, stopped by the park on Wednesday for another look at the circuit he completely re-designed. It will eventually have completed tracks for cyclists of all ages and abilities.

“I think we are doing really well. Phase one is done and we will work on phase two when I get back,” said the Maple Ridge resident. “It seems to be busy every day and there’s been good work creating stewardship with the riders of doing some of the work, so hopefully they will maintain it when I am off.”

It’s taken the efforts of volunteers and the generosity of local businesses for the project to become a reality.

“I never been involved in a community project where the community has been involved so much. Every day, people would even stop by and bring us a coffee or Tim Bits. It’s been amazing,” he said.

It was local resident Elliot Graham who got the park upgrade rolling months ago when he approached the City of Delta.

The endless hours of work has pulled him away from managing his business, Mark’s at Tsawwassen Commons. Once completed, he says it will be the collective effort of the community to upkeep the park in the months ahead.

“It will be up to the local riders to maintain this until such time we can create an association,” said Graham. “It’s now their time to rake, water and maintain the jumps. Once we get the limestone (rock), get it paved and finish the pump track, I think we will be there. It won’t be a big bike park, but a really done well bike park that people will come to.”

Graham also brought Jason McCormick onboard to oversee the project. He is another Ladner resident that is president of Action BMX, a bike park in Surrey.

They have leaned on plenty of others including Tara Heathcote who has coordinated donations of building materials and even purchased some equipment herself. Businesses to contribute include Double R Rentals, Dunbar Lumber, Ponderosa Construction and BA Blacktop. The latter is donating about 6,000 square feet of asphalt that will be utilized in different areas of the park. Paul Beathcote and Kristin Vissher provided donations for fuel costs while the work of jump builder Wesley Sherrell and all the kids over the past few weeks has been much appreciated.