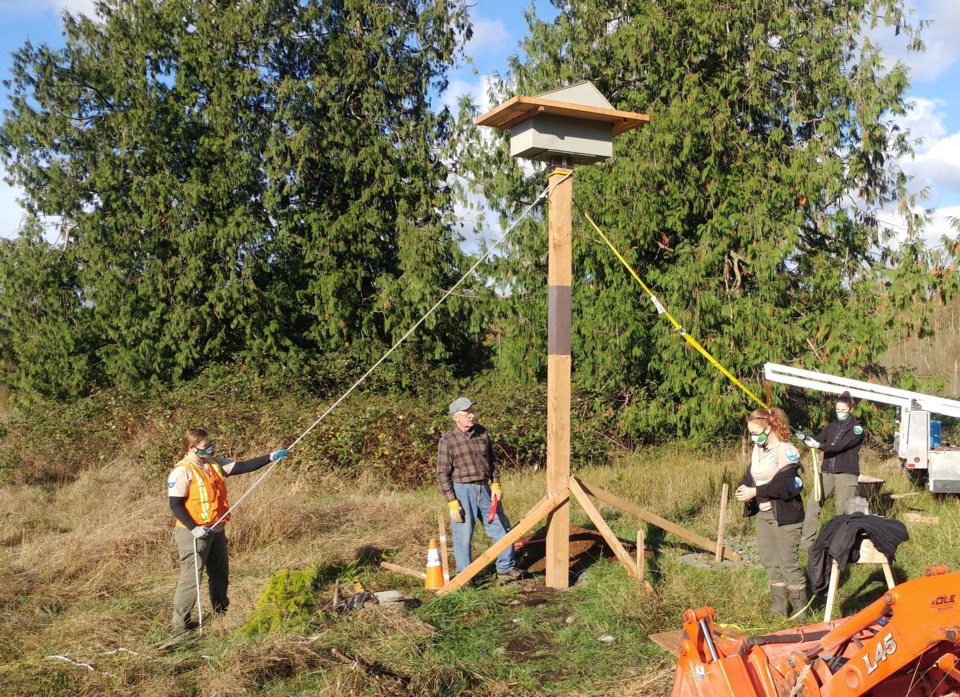 This is an extract of a short article written by Delta Naturalists member Peter Ward, for the spring 2020 edition of Feedback Magazine, published by the Barn Owl Trust in the United Kingdom.

We are in the 10th year of a long-term project to encourage breeding of Barn Owls in our nearby farmlands and river delta.

Several hundred Barn Owls inhabit the lower Fraser Valley, with much smaller numbers on Vancouver Island and in the Okanagan. Prior to established agriculture in the valley, Barn Owls were absent. Their favourite prey item in our area is Townsend’s vole. This large vole (weight about 50 to 70 grams), is periodically extremely common in rough grass habitat, such as abandoned fields, in golf courses that are managed for long grass at the edge of fairways, and­ in blueberry farms.

The decade long trend in the population of Barn Owls has been downwards, because of impacts from road kill, rodenticide use, loss of farm habitat, and collapse of old barns. A recent overview of the threats to Fraser delta, resident and migratory birds, was provided by James Casey, “A Delta in Danger”, BirdLife Magazine, April-June 2019, pp. 54-55.

Our informal volunteer group, known as CBBT (Cascade Bird Box Team) came together in 2016, having started in a small way in 2011 by three of us, with ongoing encouragement from by our Biologist member, Sofi Hindmarch. Many of us are associated with DNS. In the last four years we have adopted our own “Cascade” design with a wraparound deck for owlets to exercise prior to fledging.

Installation of boxes at good sites is one of the main issues we face. We frequently suggest the use of pole boxes in the absence of suitable barns because of the ease of installing poles. Some excellent sites are close to high-speed roads, providing a risk of vehicle collision, and are thus undesirable. The majority of our boxes (more than 100) are occupied, and the number of these producing successful broods is high.

Editor's note: This is the third column in a new series of nature columns presented by the Delta Naturalists and other community partners.