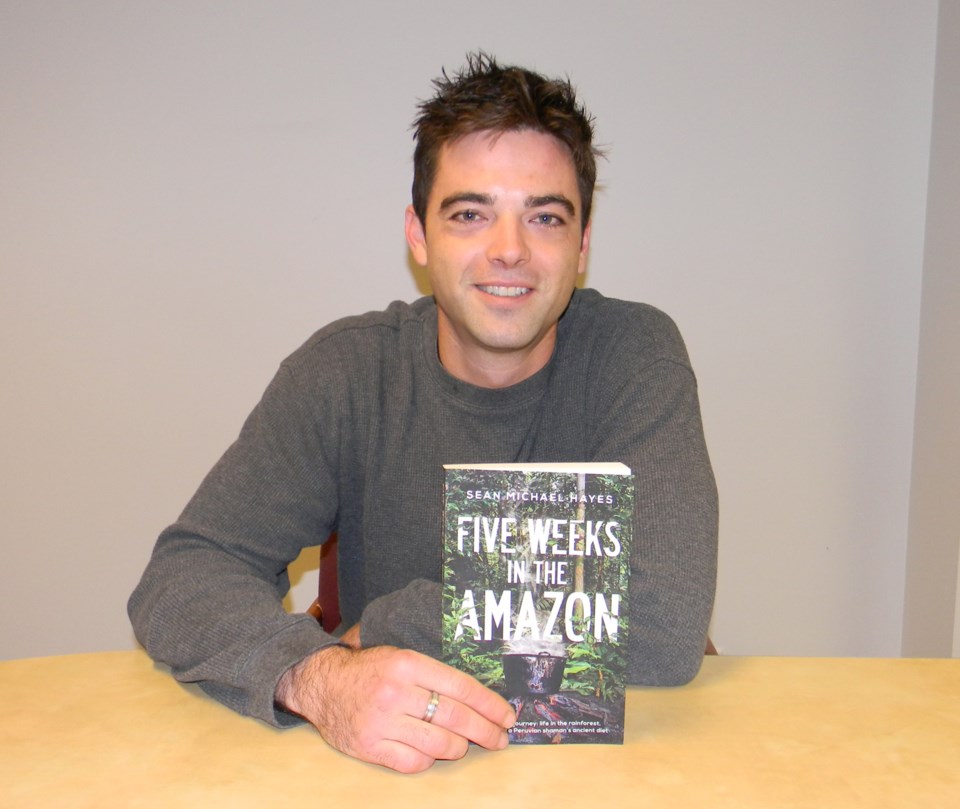 Sean Michael Hayes, who grew up in Tsawwassen, has written a book chronicling his journey in Peru.Dave Willis

Sean Michael Hayes details his adventure to Peru in his new book Five Weeks in the Amazon.

The author, who grew up in Tsawwassen and graduated from South Delta Secondary, self-published the book last month after a successful Kickstarter crowdfunding campaign.

Hayes, 31, a former pro skateboarder who went on to work in the skateboarding industry, says he went on the trip looking for answers. Hayes had a six-figure salary by the time he was 25 but by 28 he had lost his job, marriage as well as himself, according to a press release.

After great successes it felt like things came falling apart, he says.

“There were a lot of things I wanted answers to and no matter what I tried in our Western society, whether it be researching, reading the books, trying to study spirituality, going to the doctors, I couldn’t really figure it out here,” he says. “I thought maybe going back to our natural way of solving these problems might be the answer and that’s why I went and sought out this shaman.”

Hayes found the shaman and says he learned all about her medicines and practices.

“All I pretty much knew was her name and area of the jungle, but in these kinds of places that was enough.”

He took ayahuasca, a psychedelic brew, and went on a natural diet.

“What I had envisioned in my mind was a lot more extreme than what it was,” he says of the ayahuasca experience.
“I was thinking I was going to go there and holy crap it was going to be this extreme thing that was going to take me to another planet.”

Hayes estimates he had about 300 bug bites within the first week in the Amazon but over the last week of the trip, due to his new diet, he’d only got bit a couple of times.

“You become in sync with nature a little bit. You’re eating the right food from the right place and you get in sync.”

He describes the diet as really simple with the main thing being the removal of all preservatives, seasonings and most meats.

Hayes went to the Amazon in November of 2012 and wrote in a travel journal each day.

“I’d write at least a page or two of what I was experiencing,” he says.

He had a launch event for his debut book at Four Winds Brewing Company in Tilbury.

Hayes, who had been living in California the last eight years, has been doing a lot of travelling lately. He’s been backpacking in Colombia and says he’s heading to Thailand this month.

“One of the things I really feel is important is just basically living a happy and fulfilled life.”

Five Weeks in the Amazon is available at Amazon.com or canadianhayes.com.

His next book is a collection of his favourite poems and short stories he’s written over the last decade. It’s expected to be released early this year.