Donors say hospice board must represent and understand needs of community
Jan 12, 2021 2:28 PM By: Sandor Gyarmati 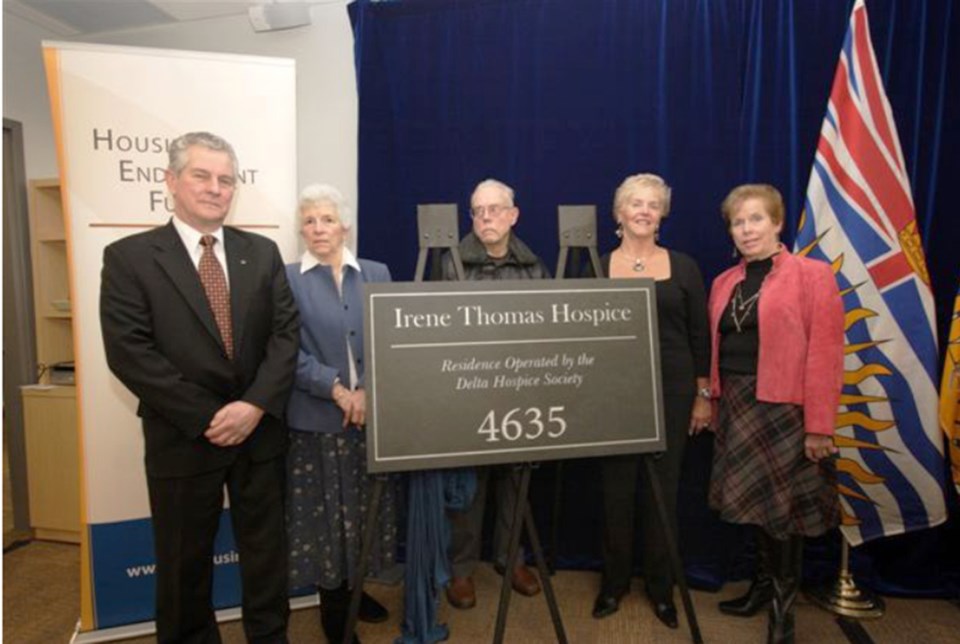 John Thomas (left) is shown at the opening of the Irene Thomas Hospice in 2010. Optimist file Photo

The group Take Back Delta Hospice has gathered critical comments from families of major donors of the hospice facility in Ladner.

The comments are aimed at the leadership of the society in response to Friday's announcement by the current board that it was issuing layoff notices to employees of the Irene Thomas Hospice, a 10-bed palliative facility, which opened over a decade ago thanks to donations from the community including $1 million from the Thomas family.

“I’m shocked and dismayed that the current Delta Hospice Society Board has chosen to issue pink slips to Hospice staff. I’m further appalled that the board has solicited Society membership from beyond the Fraser Health region and, apparently, beyond Canada’s borders in an attempt to establish the Hospice facilities as a Christian managed and guided entity,” said John Thomas, who made his family’s donation in memory of his mother Irene Thomas.

“I encourage all citizens of Delta, no matter what your religious followings may be, to recognize that the Hospice was created to serve people of all faiths and denounce this most inappropriate activity. I have no doubt that I represent the views of all my family.”

Saying the current board is out of touch with the community, Daphne Savage, whose husband Robert passed away at the Irene Thomas Hospice in July 2020, noted, “Our family is very familiar with the Delta Hospice. The Supportive Care Center is named after Robert's mother and father – the Harold and Veronica Savage Centre for Supportive Care.

“Whatever your stand on the services of MAiD, Medical Assistance in Dying, no facility should be hijacked by a group with such a narrow focus. This hospice was put in place by open minded people, wanting an end-of-life facility appealing to all beliefs and religions,” she said.

Allison Hardy, daughter of current hospice patient Cecil Hardy, also commented, saying their family is deeply concerned about the hospice and the unnecessary stress the society’s leadership is creating for their father in his final days.

The society’s board last Friday said it had no choice but to issue layoff notices as it’s about to lose its provincial funding next month.

The province last February announced it is ending its service agreement with the society.

Health Minister Adrian Dix said the society was given 365 days’ notice that it will no longer receive any funding or be permitted to provide hospice palliative care.

Dix also said the government intends to somehow keep the beds in Delta, which could involve another facility in the community or possibly taking over the current site.

After the previous DHS board voted to allow (MAiD) at the local hospice, those opposed signed up many new members to vote in a new board at a heated annual general meeting in late 2019.

Immediately afterward, new society board president Angelina Ireland reversed the policy, putting Delta Hospice at odds with Fraser Health which mandated publically funded hospices with non-religious affiliations offer the service to those who request it.

Noting the service is available elsewhere, including next door at the Delta Hospital, the current board maintains medically assisted deaths are not part of the society’s mandate or constitution, and that the procedure is at odds of the philosophy and approach of hospice palliative care.

Accused of stacking the membership with those who support their religious viewpoint, including many non-Delta residents, while rejecting hundreds of membership applications from Deltans who don’t agree, the hospice leadership last summer attempted to have a special meeting change the society’s constitution to become Christian-based.

Members of Take Back Hospice went to court and successfully blocked that meeting.