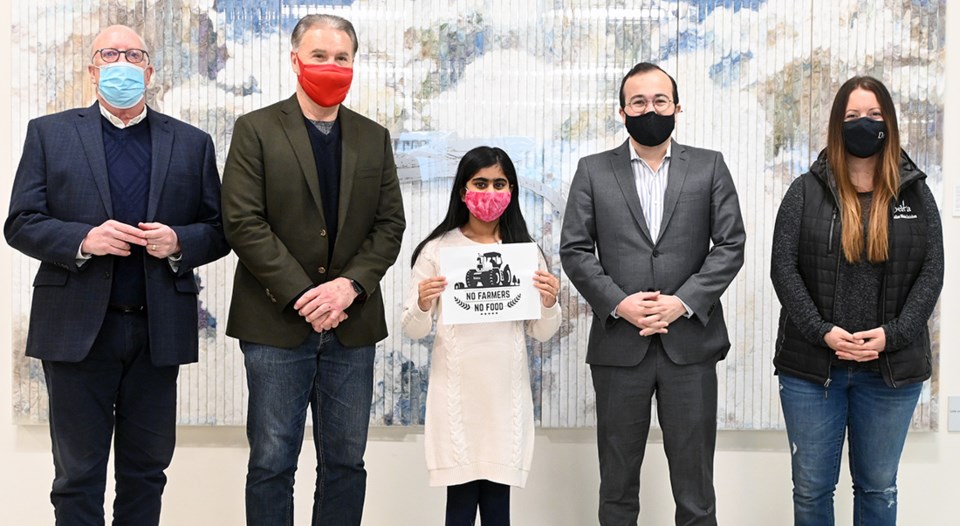 Maya Dhillon’s passion and knowledge of the ongoing farming protests in India certainly got the attention of her hometown.

The Grade 5 student at Southpointe Academy wrote a detailed letter to local politicians on the farmers’ battle to protect their livelihoods as the Indian government has proposed new laws that would greatly impact the value of the products they grow.

"As descendents of Indian farmers, I support this protest because the outcome of these forced laws will uproot our culture and identity which is more valuable to future generations than money," wrote Dhillon. "All of my ancestors were farmers. When they immigrated to Canada they did farming. Now that these corporate companies are forcing their way in to gain profits, farmers will lose their freedom. Majority of the farmers protesting from Punjab are Sikh and a large portion are grandparents and great grandparents. Despite the capital being a hotspot for COVID-19 they risked their lives for their families future. India is a democratic country like Canada, however this situation feels like a dictatorship."

On Friday, Dhillon and her parents were invited to Delta City Hall where she met with Mayor George Harvie, councillors Dylan Kruger and Alicia Guichon, and Delta South MLA Ian Paton.

“It’s so important for the farming community there to have a good standard of living and the only way they can have that is by getting decent value for the products that they grow. I really feel for them and behalf of myself as mayor and council we really appreciate (Maya) coming forward and bringing it to the attention of our community,” said Harvie.

He went on to encourage Dhillon to continue to have a voice in the community and to consider one day joining the Mayor’s Youth Council.

“We need to listen to people your age to ensure we are doing the right things on decisions that we are making that effects the next 10, 20 or 30 years,” Harvie said. “Even myself being on the Metro and Translink boards, we are making decisions that are going be there for 100 years. We got to make sure we’re not thinking about right now but what’s going to be happening in your future.”

As a farmer and Official Opposition Agriculture Critic, Paton said he certainly understands Dhillon’s concerns and the difficult situation for Indian farmers.

“In Canada we have Supply Management for different types of farming, so there is a guaranteed minimum price you will be paid and that way farmers can budget every day of the year how on how much they are going to bring in for their products,” he said. “In India they are a losing that opportunity to at least have a guaranteed price and make a decent living.”

Guichon’s family is also heavily involved in the farming community.

She said she appreciated Dhillon generating further awareness on the Indian farmers’ plight.

“We have so many farm workers here that are just one or two generations (removed from India), so it really hits close to home and a lot of people here,” she said. “Just to imagine it happening here with the censorship and all the things that they are going through. It’s so hard for us to fathom. That’s why it’s so great bringing that awareness to a farming community like Delta.”

Kruger was impressed with just how much detail Dhillon laid out in her letter.

“The letter was well-written and well-researched and Maya is only in Grade 5,” he said. “Just putting it altogether was really impressive. I’m really proud of her and having her in our community.”