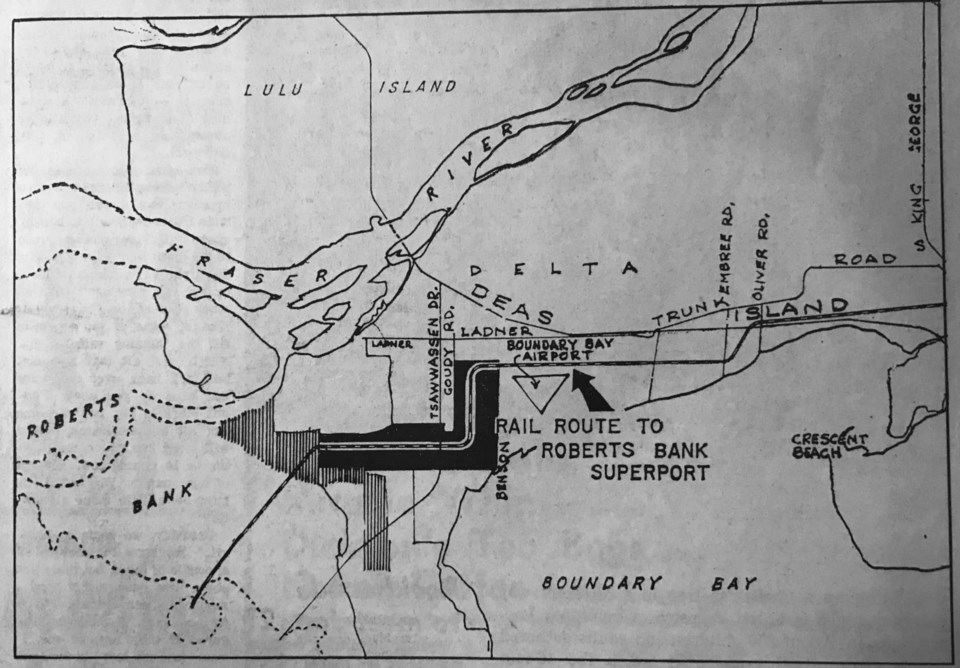 Let’s head back to early 1969 to revisit the huge controversy in Delta following a recent expropriation of 2,000 acres of farmland by the B.C. Harbours Board.

Farmers met to discuss the “land grab” and whether they could afford to lease their lands back.

Expropriation notices were sent to 37 Delta property owners in a proposed mile-wide industrial and service corridor along the Roberts Bank rail route.

The land was to serve the new port including industrial back up lands.

The harbours board had also expropriated just under 2,000 acres paralleling the Delta foreshore.

A day after the expropriation latest notices were sent, W.C. Mearns, B.C. Harbours Board chairman, said the deep sea port would likely require 20,000 acres of land to meet future industrial and waterfront requirements.

Years later, after realizing the expropriated land was not needed, the province offered to sell much of the farms back to their original owners.

However, just over 600 acres of Brunswick Point farmland was held.

During city council’s discussion this past summer on the proposed port expansion at Roberts Bank, Mayor George Harvie warned Delta’s prime farmland would be targeted for conversion.

“Make no mistake, if this project goes ahead, the only lands that are available are agricultural lands. As chair of the Metro Vancouver Industrial Strategy Committee, we know that. During the panel presentation that I made I asked them to identify which lands they, the port, are going to be looking at. We never got a result,” said Harvie.

“They’re not going to answer because we know what the answer is, it’s the existing agricultural lands that are going to be targeted by the port. And remember, the port being federal has the authority to buy those lands and change the zoning any way they want, regardless whether it’s in the Agricultural Land Reserve or not,” he added.