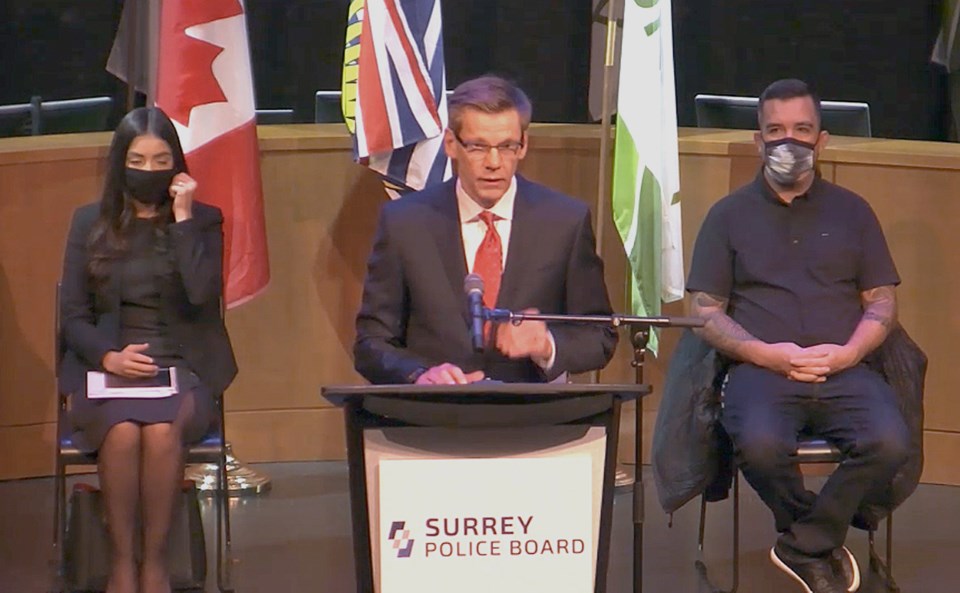 He’s now in charge of what will be a new police force in the province’s second biggest city.

Mayor Doug McCallum, calling it an exciting time, at a news conference Friday announced with members of the Surrey Police Board the hiring of Norm Lipinski, currently the deputy chief of the Delta Police Department, to be the first chief of the city's new municipal police force.

Noting they’ve made a lot of progress in creating a modern, urban police service, and their search has found a visionary leader, McCallum said they’ve taken a major step toward a safer future.

According to the police board, in the coming weeks Lipinski will assume leadership of the SPS, bringing over 25 years of experience serving within large, urban Canadian municipalities.

Lipinski served as deputy chief of both Delta Police and the Edmonton Police Service, as well as Assistant Commissioner for the RCMP.

“I am honoured to lead Surrey through this important transition towards a more modern, inclusive, accountable, and community-based policing model,” said Chief Constable Lipinski in a news release.

“I look forward to working closely with Surrey’s diverse communities to learn more about their priorities and building a service to meet the needs of this rapidly growing and dynamic city.”

At the news conference he said an advantage of having a municipal police force is an ability to move quickly.

McCallum, chair of Surrey’s board, stated, “We are confident Chief Norm Lipinski is the right leader to bring Surrey into a new era of modern and progressive policing while staying attuned to the priorities of this growing community. A city like Surrey needs a locally governed and accountable service and I am thrilled we are delivering on a promise we made to this city’s residents and business community.”

McCallum also described the hiring of someone with RCMP experience as a big advantage. Surrey is planning to transition from its RCMP force.

Lipinski was selected through a rigorous recruitment process led by a third-party professional search firm and vetted through objective decision-making criteria framework that placed particular emphasis on leadership experience, demonstrable experience promoting progressive policing policies, including commitment to de-escalation training and ability to foster a diverse and inclusive environment, the police board states.

Saying they will work toward a progressive, accountable police service in what will be a new era of policing, Lipinski at the news conference noted Delta’s model of “no call too small” when describing how the new police force will be reflective of Surrey’s needs.

The police board notes his first order of business is to start recruiting officers.

Lipinski and the Surrey Police Board will also immediately get to work developing Surrey Police Service’s first Strategic Plan that will outline the priorities, goals and objectives of the SPS, the police board explains.