The male eaglet did not break anything from his fall and OWL expects him to make a full recovery
Jun 22, 2021 9:00 AM By: Dani Penaloza/Contributing Writer 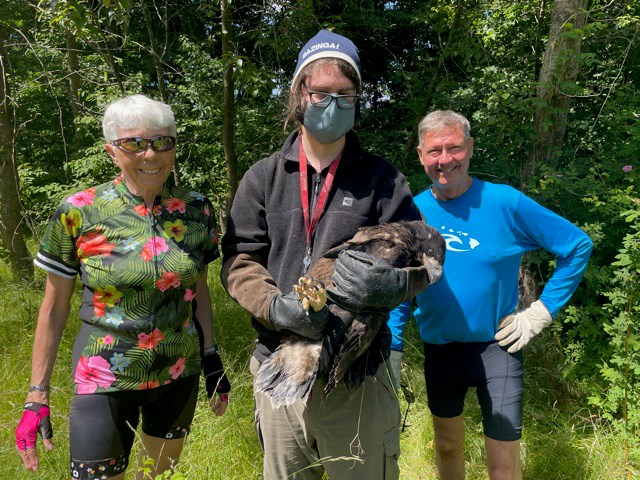 A baby eaglet is now in the care of Orphaned Wildlife Rehabilitation Society (OWL) following the swift actions of OWL volunteers and a pair of cyclists.

While biking through the Millennium Trail in Ladner this past weekend, cyclists Elizabeth Smith and Ron McKenzie happened upon a seven-week eaglet sitting suspiciously still on the edge of the path.

“We went slowly up towards it, and we stayed about five feet away from it, and it just sat there. And so, Ron and I said to each other, ‘this doesn’t look right,’” said Smith.

After Smith called the Orphaned Wildlife Rehabilitation Society 24-hour phone line for raptor rescuing emergencies, volunteers Matt Hlus and Joanne Barbeau were on the trail with their net and gloves within 20 minutes.

By then, the eaglet had limped over to a tree, but McKenzie was keeping an eye on it while warning fellow cyclists to pass slowly.

“They were amazing. They saw it at the base of the tree, they had the net on it, and then Matt had it in his hands,” added Smith.

Barbeau described the rescue as quick and smooth, and credited Smith and McKenzie for keeping the eaglet in sight, as finding the raptor can sometimes be the hardest part.

“It looks like he was just young and on the ground, which sometimes happens – they fall from the nest,” added Martina Versteeg, a raptor care supervisor at OWL.

Versteeg said the male eaglet did not break anything from his fall and OWL expects him to make a full recovery once he is old and strong enough to be released.

The eaglet is being raised by a bald eagle foster parent, alongside some other orphaned or injured eaglets, to be taught how to communicate and behave, said Barbeau.

“He’s a very lucky eaglet to have been found,” she added.

Barbeau advises that if you happen upon eagles, falcons, hawks, osprey, owls, or vultures who look like they could use some help, to call OWL’s phone line at 604-946-3171 immediately and to try to keep them in sight until the rescuers arrive.