Alumni tourney all about Graeme 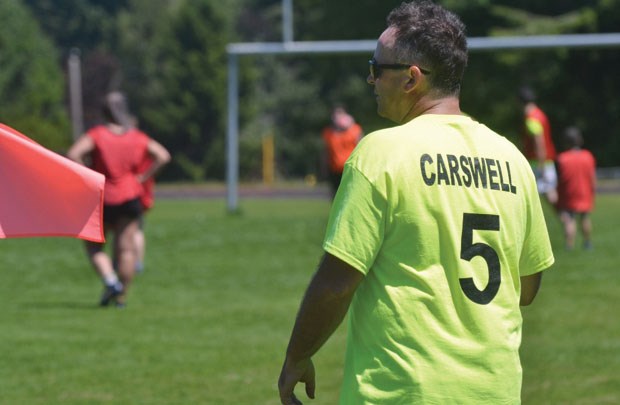 Graeme Carswell touched the lives of many and that was evident at the South Delta Secondary School oval on Saturday afternoon.

It was in February of last year when Carswell lost his life in a tragic fishing accident on the Chilliwack River. He was just 21. It didn't take long for the community to find ways to honour the SDSS graduate and national level field hockey standout.

The Sun Devils soccer program created an alumni game with all proceeds going to the Graeme Carswell Follow Your Dreams Award.

About 30 graduates participated in this year'event that featured seven-a-side mini-games and a post-match social at the Rose and Crown Pub for further fundraising. The cost was $30 and included a commemorative T-Shirt with all proceeds going to the Carswell award.

"He had such great spirit. Everything he did was with a smile on his face yet he was a real competitor. He was one of those rare kids that can be competitive but still be nice too," said longtime South Delta teacher Stephen Burns, who coached Carswell in soccer and at the school and community levels.

"Graeme was not only a good athlete but a musician too. He was able to get along with so many different groups of people in the school," added SDSS athletic director and co-coach Brent Sweeney. "Quite often you will see athletes hanging out only with athletes or musicians sticking together. Not Graeme. He was a great kid who basically had no enemies."

Burns and Sweeney received input from Carswell's parents Kim and Kathleen on criteria for the Follow Your Dreams Award. Initial winner Eric Swanson and this year's recpient Thorsten Schaub happen to be standout players that also had other deserving qualities.

"It doesn't necessarily even have to be a soccer player," continued Sweeney. "It's somebody, boy or girl, with leadership, kindness and perhaps athleticism too. Graeme wasn't the greatest of soccer players but he was certainly a very tough guy to play against and those are the sort of qualities we are looking for.

"Ideally, we would like to increase the funding and the Carswells can give out two scholarships down the line."

The Graeme Carswell Follow Your Dreams Awards was also established by the Falcons Field Hockey Club.

Last week, the Falcons announced Brendan Guraliuk as the 2017 winner.

Guraliuk was recently named to the 2020 junior men's national team and volunteers a tremendous amount of his time to the club as a umpire and a coach.

Krista Jensen won the inaugural award a year earlier thanks to her talent on the field and immense contributions to the game off of it.