Blazing a trail to Team B.C.

Ladner's Ashley Morrow left her hometown association 7 years ago to chase her dream
Oct 14, 2019 10:00 AM By: Mark Booth 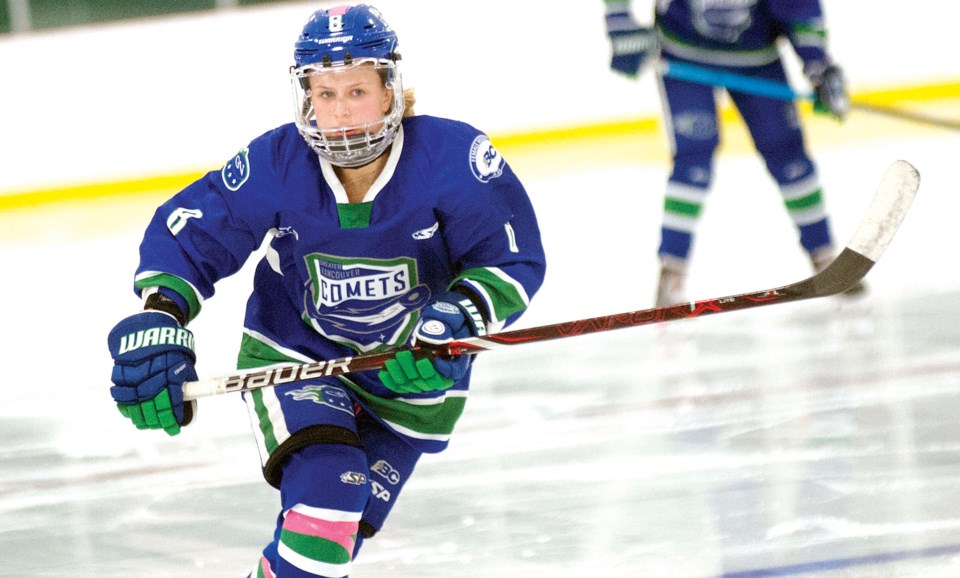 It was quite the September for Ladner’s Ashley Morrow who earned tournament MVP honours in helping the Midget AAA Greater Vancouver Comets win Stoney Creek Showcase in Ontario. A week later she became the first female player from South Delta to make U18 Team B.C. in recent memory. The 17-year-old will be taking her career to the university level next season.Mark Booth

It was seven years ago when the Ladner forward played her final game for the South Delta Stars — the girls recreational program run by the South Delta Minor Hockey Association. Today, she is a member Team B.C. headed to the upcoming U18 National Championships in Manitoba and also a top university prospect.

“I hope it show girls in Ladner they can prove themselves too and it can work out like this,” smiled Morrow.

She could have been content staying in her hometown, playing with her friends, and trying to win Pacific Coast Amateur regular season and playoff house banners each season. Instead, she wanted much more.

Morrow went through the Massey Tunnel and spent the next four years playing on the Richmond Ravens’ Pee Wee and Bantam rep teams. To earn her release from South Delta, she had to prove she was ready for that level by successfully earning a spot on a SDMHA boys Pee Wee rep team.

It’s a path a number of local girls have gone before to be key contributors to the Ravens’ organization.

When she was 15, Morrow was at another cross-road. Stay with the Ravens and be part of their dominant Midget “A” team or tryout for B.C. Hockey’s Female Midget AAA League?

Not only did she choose the later she took aim at playing for the juggernaut Greater Vancouver Comets.

“I know some of the girls that played there and I had heard good things about their coach (Mark Taylor). From there I went and gave it a shot,” recalled Morrow. “I actually didn’t think I was going to make it. I knew the competition so I actually was kind of like an underdog going into it, just knowing where those girls had come from.”

Morrow not only landed a roster spot but showed enough to be invited to the Team B.C. U18 tryouts in her 15 and 16 year-old seasons.

On her first attempt, she advanced all the way to the final cut downs — a four-day camp held at UBC. The second time she didn’t get past the week-long provincial camp held at Shawnigan Lake.

“You can’t really let it get into your head and bring you down but rather use it as motivation,” the Grade 12 South Delta Secondary student said.

It just meant working even harder for her third and final try, spending plenty hours with local hockey instructor Shane Kuss who Morrow gives high praise for her development as a player. This time she would be one of five Comets to crack the 20-player roster.

Morrow’s performance back east not only earned her an MVP award but plenty of attention from college scouts too. A whopping 14 schools reached out to her.

“There were emails, texts, phone calls to our house and to our coach and manager too,” smiled Morrow. “I’m close to making a decision but want to tour a couple of schools first. There is one in the US and two in Canada. It’s got to be a good school academically as a girl playing hockey this is as far as it goes but I’m hoping to one day play for Canada too.”

For the second straight season she has a travel companion for her long commute to Coquitlam for Comet practices. Her younger sister Brooklyn, 15, is on the team and they were actually linemates in last week’s 10-0 romp against Vancouver Island.

The Morrows would love their final season together to end at the Esso Midget National Championships next springNational Championships next spring, something the Comets have come close to doing the past two seasons — only to lose to the Alberta champions in the Pacific Regional final. This time they are ranked No. 1 in the country among U17 Midget AAA and academy teams.

“It’s been quite the heartbreak (losing to Alberta) the last two years knowing we can play with them,” added Morrow. “We dominated Stoney Creek like we never had before and there are a few of us third-years who are motived to get to nationals.”