Devil of a time as Vanier Cup champs 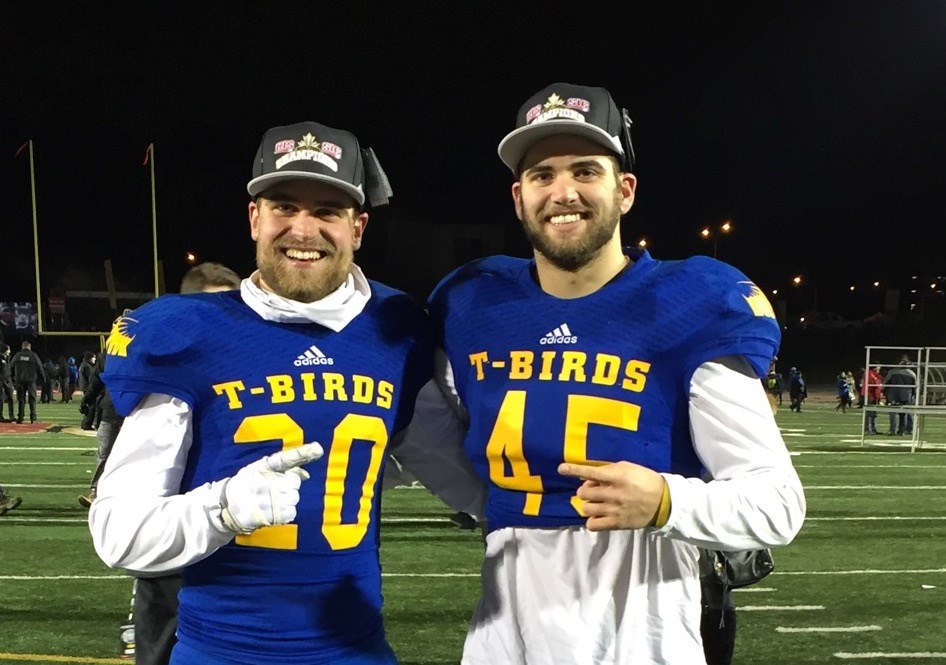 Teammates since their days as co-captains with the South Delta Sun Devils, Chris Adams (left) and Riley Jones were all smiles last Saturday in Quebec City where the UBC Thunderbirds captured the Vanier Cup national championship.

Chris Adams had never won a championship playing sports in his entire life. That all changed in one magic month for the UBC Thunderbirds.

The fourth-year defensive back ended his university football career in grand style by helping UBC capture the Vanier Cup with a thrilling 26-23 last-second win over the defending champion Montreal Carabins last Saturday in Quebec City. It was the Thunderbirds' first national title since 1997.

Adams hadn't played organized football until his friends, including Jones, convinced him to give it a try in his Grade 11 year at South Delta. The Sun Devils fielded very competitive teams for the next two seasons but failed to win a playoff game.

Adams and Jones both earned roster spots with UBC in 2011 where the Thunderbirds reached the conference final but were later stripped of all their wins for using an ineligible player. Two difficult seasons followed, including a 2-6 2014 campaign that resulted in the departure of head coach Shawn Olson. If that wasn't enough, a year earlier the funding for the football program was in question as part of a review of all varsity sports at UBC.

However, a group of prominent alumni, headed by David Sidoo, insured UBC Football had a future and then some. The Thunderbirds made waves last December by hiring Blake Nill as their new head coach. He had enjoyed an outstanding nine-year run at the University of Calgary that included six Canada West championships and three Vanier Cup appearances.

Surely, it would take at least a couple of seasons for the T-Birds' to climb to those heights, or so it seemed.

Nill sent the T-Birds' inflight when he convinced quarterback Michael O'Connor to come north after the highly-touted Ottawa native was unhappy with his situation at Penn State University after one season.

UBC got off to a surprising 3-1 start and O'Connor was putting up big numbers. One of his favourite targets was Mann, who had 13 catches for 294 yards over that stretch, before being sidelined for the season with a broken collarbone.

The Thunderbirds would go on to finish second in the conference and earned a semi-final home playoff game where they thumped Manitoba 52-10. A week later, they stunned No. 1 ranked and unbeaten Calgary 34-26 at McMahon Stadium to win the Hardy Cup.

The momentum continued in Nova Scotia as UBC rolled to a 36-9 win over St. Francis Xavier, setting the stage for last weekend's thriller against Montreal.

"It's all still so surreal for me," said Adams on Tuesday. "We're all just kind of sitting here and can't believe what just happened. All those years playing sports and I didn't even win a medal. Now I'm going out with this.

"I think we proved you don't win games on paper.

The thing about Coach Nill is he makes sure everyone is accountable for their actions at all times."

As for Jones, football has been a huge part of his life.

He enjoyed a two season stretch with the Bantam Rams where they didn't lose a game, before an all-star high school career. The overall lack of success at the university level was all new to him.

"I think over the years with the Rams we went something like 49-0 so losing was something I wasn't used to," laughed Jones.

"We had already beaten Manitoba twice so that (first playoff win) wasn't a big surprise. But to go into Calgary, play great and beat a team we had lost to (badly) the last three years, really had us believing we can do this."

The extra month added onto to this season cut into study time.

UBC also elected to stay back east after the win in Halifax to prepare for the Vanier Cup. That meant doing plenty of school work on the road with a mandatory study hall, under the supervision of the team's academic coordinator Sandra Wigg. "At that time, our focus would normally only be on school with mid-terms at the forefront," added Jones who is working on a degree in Psychology and has a year of eligibility remaining. "It was a big part of our week back there."

Adams is finishing up his degree Speech Sciences.