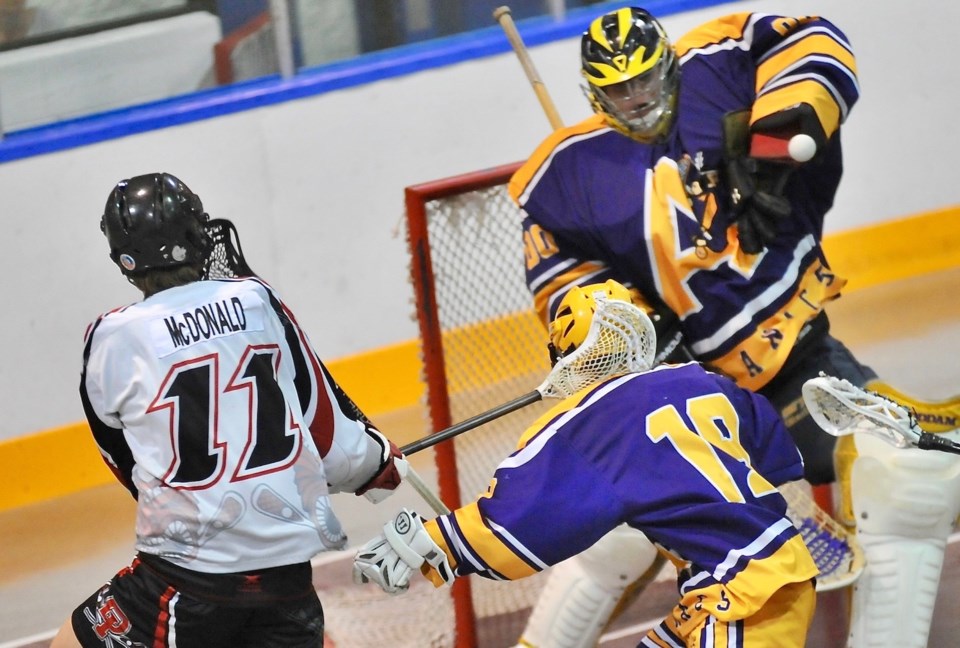 Ben McDonald was turned back on the this scoring chance but the Delta Islanders captain still produced a hat trick and six points in Sunday night's 12-8 victory over the Coquitlam Adanacs to give his team a 2-0 lead in the best-of-five BC Junior B Tier 1 championship series.Mark Booth

The final game of the 2019 lacrosse season at the Ladner Leisure Centre was a winning one for the Delta Islanders and has them on the brink of capturing the B.C. Junior B Tier 1 Lacrosse League playoff championship.

The Islanders defeated the Coquitlam Adanacs 12-8 on Sunday night to take a 2-0 lead in the best-of-five finals. The result came on the heels of a 10-7 game one victory on Friday that was also played in Ladner due to a scheduling conflict at the Coquitlam Sports Centre.

Now the remainder of the series shifts to Coquitlam, starting with game three on Tuesday. If the regular season champion Adanacs want to go beyond that they will need to find a way to slow down the Islanders’ top guns and get more shots past goalie Ashton Leclair.

He was terrific in the series opener, making 45 saves as the visitors enjoyed a 52-32 advantage in the shot department. He made 43 more stops on Sunday but the Islanders’ attack was also firing on all cylinders too.

Regardless of the series outcome, the Adanacs will represent B.C. at the Founders Cup in Winnipeg — Aug. 12-18.

That was based on their first place finish in regular season play — a decision made by the league board of governors some time ago to provide adequate time to fund raise for the trip.

The senior “B” Ladner Pioneers still have at least two home playoff games remaining but both will be played at Sungod Arena in North Delta. Ice is scheduled to be installed at the LLC after the B.C. Day Weekend. The Pioneers are in the WCSLA finals after sweeping Victoria and are awaiting the winner of the other semi-final series between Nanaimo and Coquitlam.