South Delta Minor back on ice with prep camps

COVID-19 safety measures will give the coming hockey season a much different look
Sep 4, 2020 2:00 PM By: Mark Booth 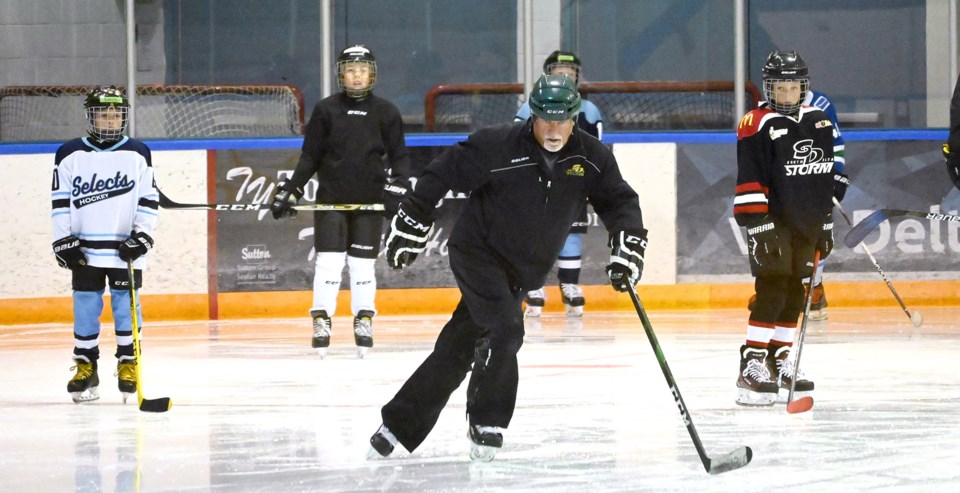 It’s a familiar scene at least on the ice at the Ladner Leisure Centre this week.

The South Delta Minor Hockey Association welcomed back players with its annual prep camps that will lead into a 2020-21 season that’s going to have a much different look with plenty of COVID-19 safety measures in place.

Some of those protocols were already evident including limited access into the LLC arena (east entrance only) and players coming in full gear. Skates must be put on in the lobby area with dressing rooms closed. Parents are restricted from entering the building for now. Only 20 players and coaches are allowed on the ice at a time.

It’s been the efforts of long-time SDMHA volunteer Wayne Carleton that has put the association in position to proceed with its season.

He stepped up to take on the role of Return to Play Coordinator along with his communications officer duties. He also happens to sit on a six-member committee with the Pacific Coast Amateur Hockey Association that has put safety guidelines in place while closely working with Hockey Canada, BC Hockey and ViaSport that oversees all provincial amateur sports associations.

In his profession as a golf course architect, Carleton was earlier involved in the safety planning to get B.C. golf clubs opened again which led to his similar role with minor hockey. Thanks to terrific work and support with the city, SDMHA was able to get a jump on other hockey associations by successfully hosting a summer skills program that began back in early July.

“It’s been rewarding but a lot of time above and beyond too,” he said. “The priority is the safety and health for everybody. That’s what we’re focusing on and getting people use to the new normal. We don’t know how long this is going to last. Hockey Canada has lot of protocols in place. It’s just a matter of adapting. Everywhere is different.”

The set-up for the prep camp will carry well into this month with the focus being on development and evaluation. If and when league schedules are released it will be in cohort groups against nearby teams for a series of games. It would be followed by a break before a new cohort group is formed.

“Rep tryouts are usually a two to three week process where this year it’s the month of September,” Carleton continued. “There is no determination when rosters need to submitted or when there will be potential game play.

“If Pacific Coast doesn’t announce league play, a lot of associations could do in house game play. Rep teams could do three groups of 10 and do 4-on-4 play. It could last a couple of weeks. It could last a month, two months or until Christmas. Everything stays the same until sometime in October. We know that for sure. “We will keep our fingers crossed and hope (COVID-19) moves into a positive direction.”