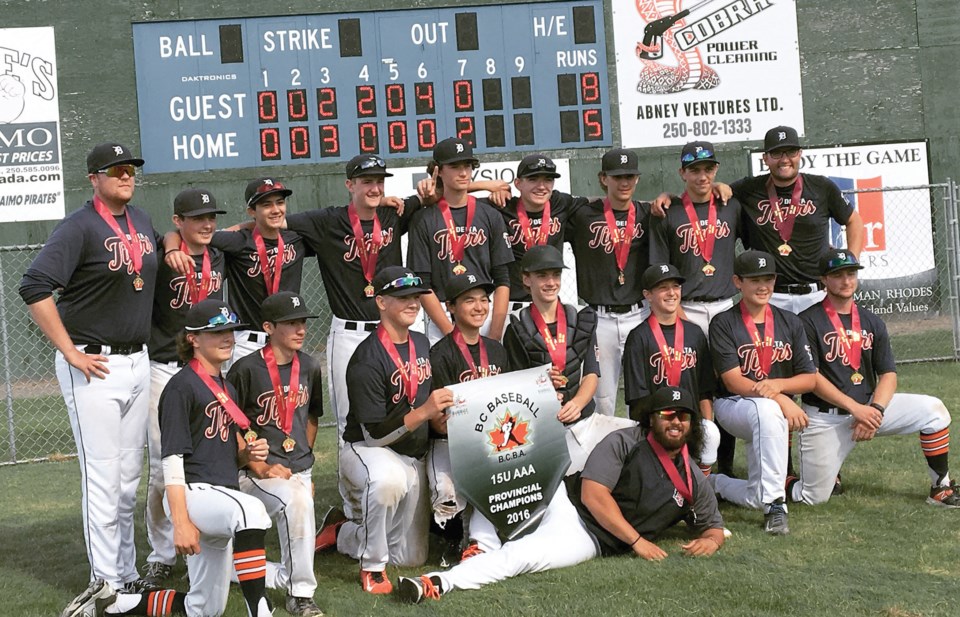 Delta Tigers have wasted little in reaching the penthouse of B.C. Baseball Association’s Bantam AAA tier.The second-year U15 program capped a memorable weekend in Nanaimo with an 8-5 victory over Vancouver Minor to capture the provincial championship. Delta won five of six games at the 10-team event including a thrilling 2-1 semi-final triumph over Richmond.
With support of all three minor baseball associations in Delta, general manager and head coach Cam Frick knew it wouldn’t take long to assemble enough talent to contend. However, the ascend was even quicker than he imagined.
“It was something I dreamed about at the start of the season but, realistically, I knew there were a lot of good AAA programs around and it could take some time,” said Frick. “When we won in Richmond (back in May) it showed we were a good tournament team and what we were capable of.”
The Tigers finished with a solid 22-9-1 regular season record but went through a rough patch in July that included coming up short in a qualifier tournament for Baseball B.C.’s provincials that offered berths to Nationals and Westerns.
The boys refocused and were determined to end their season on a high note. They did just that with three impressive victories out of the gate at provincials to promptly nail down a semi-final berth.
Delta opened with a 4-1 victory over Vancouver Community behind the stellar three hit pitching of Braedy Euerby. Travis Miller also drove in a pair of runs.
It was then Sean Sasaki’s turn to dominate on the mound, allowing only just one hit in nearly six innings in a 6-1 win against Burnaby. Caleb Cassie then tossed a complete game five-hitter in a 5-2 triumph against Nanaimo.
The Tigers then took the opportunity to rest some players and pitchers in a mean-nothing 9-4 loss to Cowichan on Saturday to conclude round-robin play. The stage was set for Sunday morning’s playoff against Richmond in what was a rematch of the Chuckers’ tournament over the Victoria Day Weekend.
Euerby got the win in that game and the Ladner rookie was up to the task one more time, with a complete game two hitter to nail down the championships’ top pitcher award.
The Tigers rallied to get the win, scoring once in the bottom of the sixth, then producing the decisive run in the seventh on a suicide squeeze. Johnny Pablo-Wilson executed a perfect bunt and Connor Baily raced home after getting a tremendous jump.
Delta’s bats then delivered in the championship game against a hard hitting Vancouver Minor team that produced all its runs via the home run ball. The Tigers erased a 3-2 deficit with a pair of runs in the fourth, then broke the game open with four more in the sixth.
The Tigers roster also includes: Sean Brownem, Sean Heppner, Jared Romaniuk, Ethan McDougall, Dylan McLeod, Reilly Noble, Matt Payne and Max Ghilarducci.
Rounding out the coaching staff are: Tanner Rutledge, Jesse Burns, Ford Marcotte, Dirk Van Ommen (pitching coach), James Tereschyn and Payton DeLuca (grad assistant).