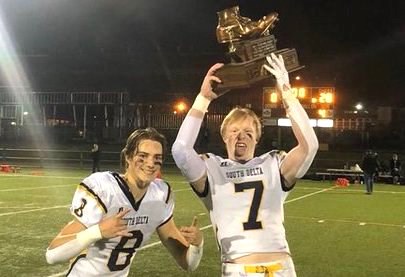 The South Delta Sun Devils have at last broken through at Mercer Stadium and secured the Kushnir Boot rivalry trophy for the first time in three years. More importantly, they are Western Conference champions and headed to the provincial AAA quarter-finals in two weeks.

The top ranked Sun Devils capped a perfect 7-0-0 conference run (9-0-0 overall) with a 28-0 victory over the New West Hyacks (5-2-0) on Friday night. The result earns them a week’s rest and quarter-final date with Notre Dame or Abbotsford at B.C. Place Stadium on Nov. 16.

Since stepping up to the the AAA tier in 2013, South Delta had dropped three straight games at Mercer Stadium, including a 63-16 shellacking two years ago.

This time they were determined to write a different script, even with star quarterback Ben McDonald sidelined with a broken collarbone.

Ample playing time this season has certainly benefitted quarterback Hunter Norman and he thrived in his first start at the senior varsity level.

The Grade 11 pivot passed for 185-yards — including 36 and nine-yard touchdown strikes to Evan Patterson and Evan Davies respectively.

South Delta dominated in all three facets of the game — including a blocked punt that was returned 26 yards for a major by Bennett Stoilen. Ethan Troniak rounded out the scoring on a 75-yard run.

There is plenty of work to do, but the path to the provincial championship game is certainly a favourable one for the Sun Devils with Vancouver College, Mt. Doug and Eastern Conference champion St. Thomas More all on the other side of the playoff bracket.