It was dinner at Il Posto on Saturday on their way to Victoria for Rivalry Series with Canada
Feb 3, 2020 10:00 AM By: Mark Booth 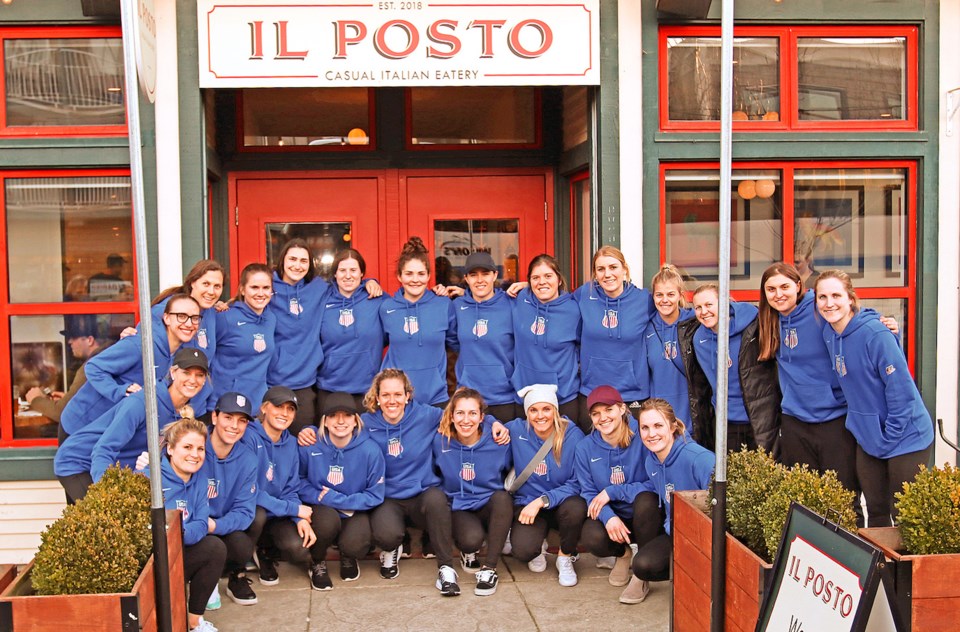 USA women's hockey team dined at Il Posto in Ladner Village on Saturday night, on their way to Victoria for game three of their Rivalry Series with Canada.Jim Kinnear

Terry Pichor and Julie Marcopoulos know their Italian eatery has an excellent reputation. That was reassured again on Saturday with a special reservation.

The USA women’s hockey team stopped in Ladner Village to have dinner at Il Posto — on their way to Victoria for game three of their 2019-20 Rivalry Series with Team Canada.

The Americans had arrived in Vancouver late Saturday afternoon from their training camp in Los Angeles and were scheduled to catch the 6:30 p.m. ferry to Swartz Bay. Their team nutritionist contacted the restaurant a few days earlier to make a reservation. The entourage included 27 players and six staff members.

Il Posto is not a Series sponsor and had not reached out to either team as a potential destination. The Team USA stop was completely random.

“We are highly rated online and it probably would have come up as the number choice when they were looking at (the route to the ferry terminal),” said Marcopoulos. "They like pizza and carb loading as well, especially before a game.

"She said the girls couldn’t just order anything from our menu. She had to pick a handful of meals that had the right balance of vegetables, carbs, fats and whatever.

“They took over our back section and were gone by 5:30 p.m., in time for all our regular Saturday night reservations. They were all so super gracious," she said.

Team USA and Canada play tonight (Monday) at Save on Foods Memorial Centre then come to Rogers Arena in Vancouver on Wednesday. The Rivalry Series concludes on Saturday in Anaheim.

“I hope they tell Team Canada in Victoria about us and Team Canada hits us on Tuesday on their way back over,” laughed Marcopoulos.