A strong message to speculators about City of Delta farmland 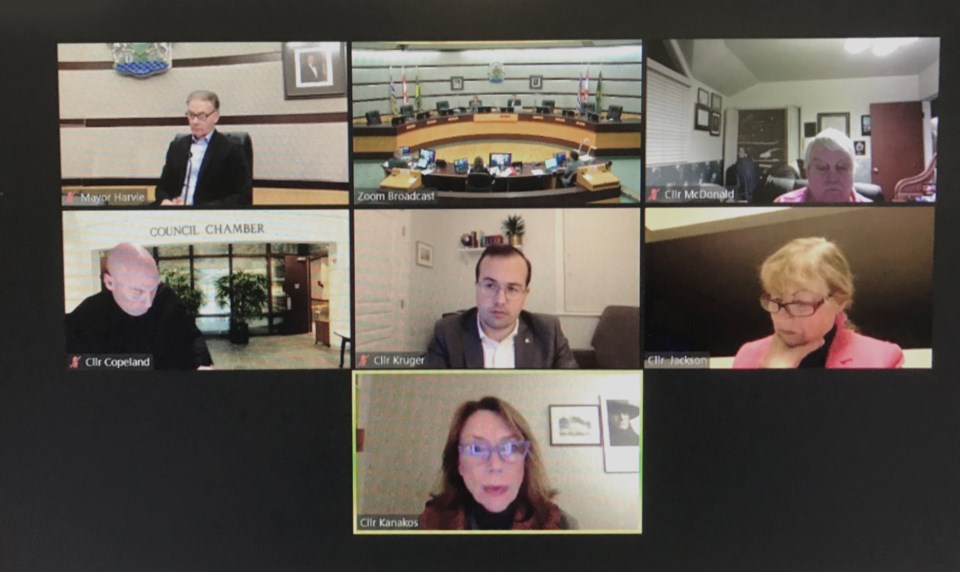 Delta planning staff told council the bylaw has been in the works for a while and should be able to withstand a legal challenge.Internet image/City of Delta virtual meeting

He has no sympathy for the speculator land owner of a controversial Tsawwassen property.

Those were among the pointed comments from Mayor George Harvie following a public hearing Tuesday as Delta council gave the go-ahead for a bylaw amendment aimed at stopping an outdoor industrial hemp grow operation and other unwanted activity at the site.

“I have no sympathy for the land owner, they’re not stewards of the land, they’re speculators, and they bought this property at a very inflated price on the market on purpose of not farming but speculation. And since that time they haven’t bothered to work with us…the planting of hemp on that property I thought was just a really bad sign insofar as trying to cooperate. They didn’t come to us. They did what they thought they could do and we suffered for a year from odour of that hemp growing to the neighbourhood there,” said Harvie.

“I just want to ensure to the rest of the speculators out there that are looking at targeting our agricultural lands, it’s not going to be supported by this council, and not supported by the community either.”

The City of Delta had not approved, or was even consulted, when Health Canada issued a cultivation licence for the industrial hemp operation in the 5700-block of 6th Avenue, a 18-hectare (45-acre) site formerly referred to as the Guichon property, but now owned by a numbered company.

The property, immediately east of the Forest by the Bay subdivision and adjacent to the Southlands and Beach Grove Golf Club, has been the subject of numerous odour complaints by surrounding residents.

More stringent than a bylaw that was originally considered for the site three years earlier, the regulations specially sets out additional prohibited activities such as the growing of industrial hemp, cannabis and even the construction of greenhouses.

Restriction of farm uses at an urban/agricultural interface has been an established practice in Delta since council adopted the A 1 Zone in 2006, which included an “edge planning area” with special restrictions, according to staff.

Staff also note the bylaw should withstand a legal challenge because the property is not on the provincial Agricultural Land Reserve, and Delta has the authority necessary to rezone the property without the owner's consent.

Harp Khela, a representative for company director Andorly Lio, during the hearing asked council to send the bylaw back to staff, saying there’s confusion and ownership needs more information, claiming to have had no conversation with the planning department.

Khela added that since an initial confusion over approvals, hemp is not being grown at the site.

Saying it’s a unique parcel of land interfacing with residents, Coun Dylan Kruger said he took exception to a letter by the owner.

“The quote accusing this council of bullying and fostering division, when those are two terms that could very well be attributed to the behaviour of that particular individual, I thought that was quite reprehensible,” said Kruger. “In addition, the assertion that there would be confusion on behalf of the owners on how we got here is also baffling to me, because I think, in many ways, we’re here because time and time again it’s trust and misuse of this property, whether it be illegal clearing of land or illegal dumping of toxic soil or farm equipment left in inappropriate places, and just a lack of respect for community.”

Coun. Lois Jackson and the rest of council commended local residents who worked hard with the city to find a solution to the problem property.

Three years ago, the city imposed a stop work order at the site when clearing began for construction of a greenhouse. No development or soil deposit applications had been submitted.

Adding to the concern of neighbours at that time, the property was listed for sale for $23.8 million, described as rezoning opportunity to residential.

The fact that it is not in the ALR was highlighted as a “builder and investor alert” in the real estate listing.

Industrial proposal next to Delta's Burns Bog gets more support
Jan 26, 2021 7:05 AM
Comments