Assurances given on huge port project in the City of Delta

The port says T2 would be in the most idea deep water location and environmental impacts can be minimized
Apr 13, 2021 7:00 PM By: Sandor Gyarmati 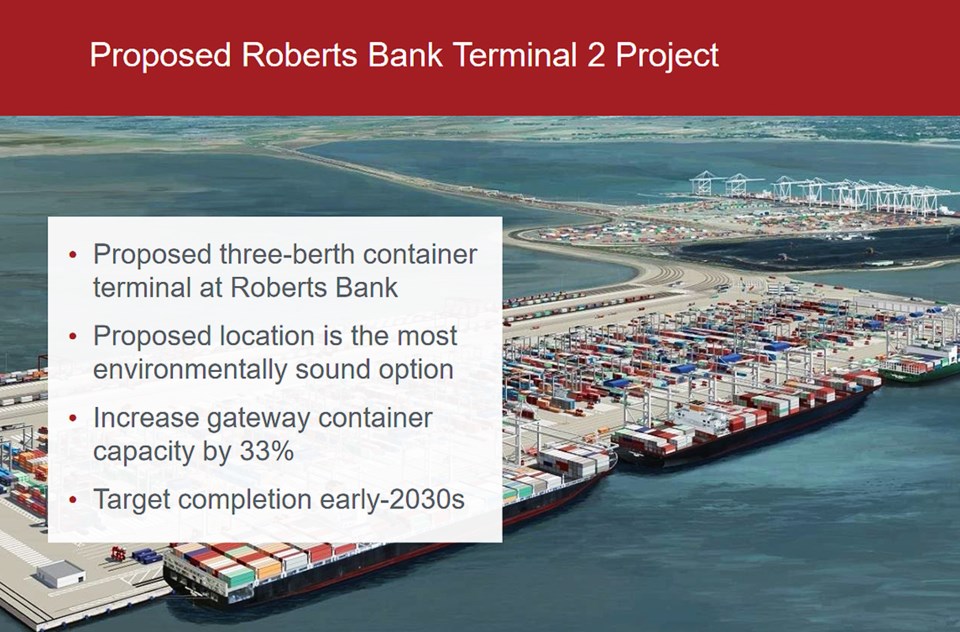 The port authority says the findings and recommendations of a federal review panel provided a road map on how, on top of existing proposed mitigation measures, the port can further mitigate project-related effects.Port of Vancouver submission

It will be an important new addition for the City of Delta as well as the Canadian economy.

That’s how representatives from the Vancouver Fraser Port Authority described the Terminal 2 (T2) megaproject, a proposed three-berth container terminal that would be built on a new man-made island adjacent to the existing port facility at Roberts Bank.

At a presentation at Delta council on Monday, Tom Corsie, vice-president of real estate, and Duncan Wilson, vice-president of environment, community and government affairs, described the need for the project to meet future container capacity demand.

They also detailed extensive environmental mitigation measures that would be part of the project including the creation of new areas for biofilm, if needed, for feeding migratory shorebirds.

“The project has also been designed to incrementally deliver a total of 2.4 million TEUs of capacity, 20-foot equivalent units, 1.6 million TEUs as part of the initial commissioning in 2031 and approximately 800,000 TEUs of capacity to be made available once it is required by ongoing growth, expected in around 2035,” Wilson explained.

Wilson noted that by building the land mass all at once and adding capacity when needed, the port will minimize the effects of multiple construction phases on the environment.

He added that an independent federal review panel agreed with their assessment that the entire capacity of the project will be needed in the future.

Wilson noted all the additional information requested by the federal government on the proposed project, including the viability of a number of the review panel’s recommendations, will be submitted by this summer.

Consultations will then take place on that information. A decision is expected by the federal government later this year.

Coun. Bruce McDonald during council’s discussion said he has a number of concerns and he admits that he’s becoming a skeptic.

However, Coun. Lois Jackson said the port has done a tremendous amount of work to address environmental and other concerns, adding that there’s no doubt future container capacity will be needed as the country’s economy grows.

Jackson was the lone opposition on council when it voted last summer to send a letter to Prime Minister Justin Trudeau, federal Environment Minister Jonathan Wilkinson, as well as others, asking that the T2 project not be approved.

In a news release this week, the group Against Port Expansion (APE) stated the central issue is the significant adverse environmental effect on polyunsaturated fatty acids on which millions of shorebirds, fishes, southern resident killer whales and other wildlife rely as an essential source of food.

It has long been a key area of concern for Environment and Climate Change Canada scientists, APE says.

APE also notes the port is scrambling to invent “the holy grail” by suggesting a biofilm guidance manual can be created for biofilm to replace what will be destroyed if T2 is built.

Wilson at the council presentation, however, stressed the port has invested more in biofilm research than any other development proponent.

The port is confident through its modelling work that the terminal footprint will not adversely impact biofilm and the review panel agreed, he said.

Wilson added the question is whether there will be any impact on the fatty acids, something that will be examined through follow-up monitoring.

Should there be an impact, programs would be in place to create additional biofilm, Wilson said.

Meanwhile, as T2 winds its way through the process, Deltaport’s current operator, Global Container Terminals, is continuing its push for a fourth berth at the existing facility to be built instead.

After receiving feedback on GCT’s initial project description, including comments from Indigenous groups and the City of Delta, the Impact Assessment Agency of Canada and the B.C. Environmental Assessment Office prepared a joint Summary of Issues on the competing proposal.

Those agencies provided that report to GCT, which has one year to complete a Detailed Project Description which responds to the issues and concerns identified in the Summary of Issues report.

Next move for alternative proposal to port expansion in City of Delta
Mar 8, 2021 11:00 AM