The high-rise project moves on to next phase after a public hearing and council meeting this week
Jun 9, 2021 5:00 PM By: Sandor Gyarmati 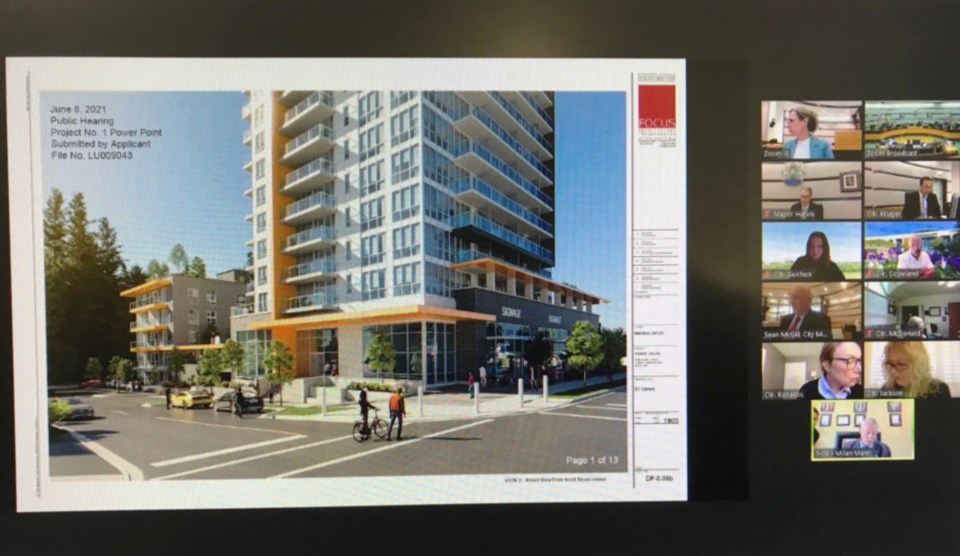 The residential and commercial development would comprise 264 units in the residential tower with ground floor commercial space, a daycare as well as a six-storey, 50-unit rental building. No Official Community Plan amendment is required as it would be located in the Townline Node section where higher density is envisioned. City of Delta Zoom meeting

After a lengthy and heated debate Tuesday where emotions ran high, Delta council narrowly voted in favour of granting third reading to a high-rise proposal for the Scott Road corridor.

Following a public hearing, Mayor George Harvie and councillors Dylan Kruger, Alicia Guichon and Bruce McDonald voted in favour of the 29-storey, mixed-use development in the 9300-block of Scott Road and 11000 block of 93A Avenue,  while councillors Lois Jackson, Jeannie Kanakos and Dan Copeland were vehemently opposed.

Still requiring final approval from council, the 314-unit residential and commercial development would comprise the residential tower with ground floor commercial space, a daycare which would be owned by the city, as well as a five-storey rental building with some of the units to charge below market rental rates.

While the number of speakers in favour of the project outnumbered those against, a sharp divide was loud and clear among council with the three opposed steadfast against allowing new high-rise towers.

The back-and-forth between council even got personal at times.

Her voice breaking, Kanakos implored council to not vote in favour of the application and suggested “let’s find a sweet spot with residents” as the development was too high and too dense.

Also noting other issues including traffic, she warned of the consequences of “loading up” North Delta.

Noting the application is consistent with the North Delta Area Plan, the Townline Special Development Area Concept Plan, which is still in the works, and the Mayor's Housing Task Force for Scott Road, Kruger said the city had been wanting to redevelop the run-down Townline Node area of the community for 19 years without drawing interest.

Also saying the city needs to approve developments which align with visions set out for certain areas, Kruger reiterated what several at the public hearing said when it comes to creating more affordable housing choices and giving younger people the ability to stay in their own community.

He asked, “Are we a city for everyone or a city for a very privileged few?”

Questioning basing decisions from a “short-lived” mayor’s task force, compared to a standing community advisory committee, which had been eliminated, Jackson said North Deltans aren’t “well off” and that it’s tough for people anywhere to get into the housing market.

“It’s not easy to get into the market today, but you know what, join the real world. It’s been like this in Canada since 2002…If you want to live in an entire area of high-rises, well, why don’t we start in Ladner or Tsawwassen then? We’ll spread it throughout the community,” said Jackson.

“You know, we’re looking at 10 affordable units, that’s not really very good. If we really analyze some of these things, because we don’t, we get this great, giant thing on the table, and all in favour and all opposed, but we don’t have debates like we should have here. Councillor Kanakos said it right: People are now coming forward when they’re seeing what the heck is really going to happen and they’re saying this is way too big.”

Also saying it’s unfortunate council couldn’t go out to meet the community, Jackson among her terse comments, directed at Harvie at one point, described the debate as “unseemly.”

Harvie gave her another opportunity to speak at length after the other councillors had spoken.

Saying he was concerned about the process and how many people could be flooding in to a relatively small area of the Townline Node in the future, Copeland argued the high-rise proposal is not the appropriate catalyst for redevelopment.

He also said incentives for the developer were the same as Delta providing subsides, a notion challenged by McDonald.

McDonald said he took exception to the three opposing councillors, who reside in North Delta as he does, making it sound as though they spoke on behalf of the whole North Delta community.

Harvie questioned the claim there was wide-spread community opposition, saying more than 18,000 notifications had been sent out and that there was, in fact, much support.

In response to Jackson saying he did not reside in North Delta, Harvie countered he was elected as mayor and has the right to make decisions for the city as a whole, adding each application will be analyzed whether it’s appropriate or not depending on the area of the corridor.