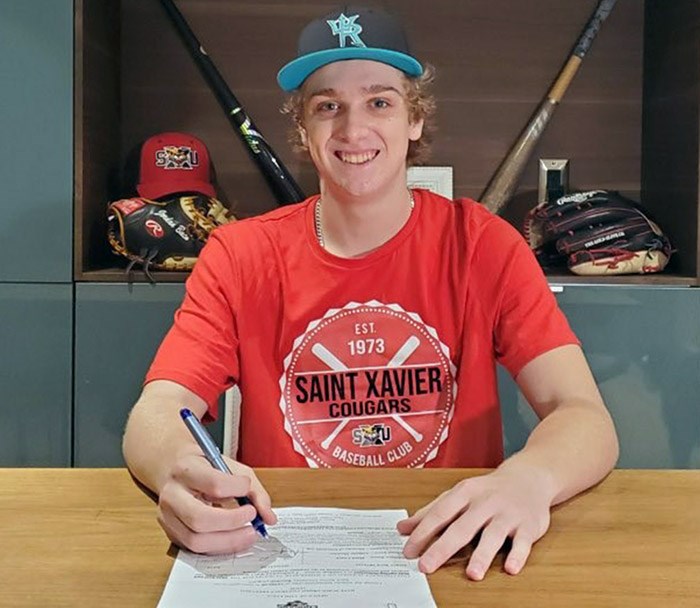 The 2003 age group certainly was a special one for the Ladner Minor Baseball Association.

It’s an impressive feat given there was little baseball played in 2020 due to the COVID-19 pandemic. Like his friends, Bach had to go a more unconventional route to get the attention of college scouts.

“With no baseball being played it was a little harder to standout,” said the Grade 12 Vancouver College student. “It just shows the importance of online recruiting. Without it, this wouldn’t have been possible. I have to thank all those online highlight videos and the people that recorded me along the way. It definitely came in handy at a weird time like this.”

St. Xavier first reached out to Bach last March and the interest and dialog increased from there. The pandemic prevented him from making an official visit to the school but he was already familiar with the Chicago area. That came from a trip a few years back on a travel team organized by his coach at the time, Cam Frick of the Delta Bantam Prep Tigers.

“That was a great trip and great memories,” he continued. “It definitely was a key factor having been to the city already and knowing what it is all about. Now I have the opportunity to go back and live there a few years.”

Bach initially stepped behind the plate during his early years with Ladner Minor and he has remained there since, playing on all-star summer teams, the Tigers and now the BC Premier Baseball League’s White Rock Tritons.

“Slowly I began to learn to love it with plenty of bumps and bruises along the way,” he laughed. “For me it was a switch I had to turn off at one point. It’s definitely not an in-coded DNA to put your body in front of a hard moving object. Definitely adjustments needed to be made along the way. I have had to match the increasing (pitching) skill level for sure.”

Bach praised the Tritons coaching staff and others for helping him take his game to the next level. Now he looks forward to what has to be a better year and will include a trip to Illinois next summer.

“White Rock is a tremendous organization and I thank everyone there for giving me the extra work and extra mile,” he added.

The Cougars compete at the NAIA level and are part of the Chicagoland Collegiate Athletic Conference.