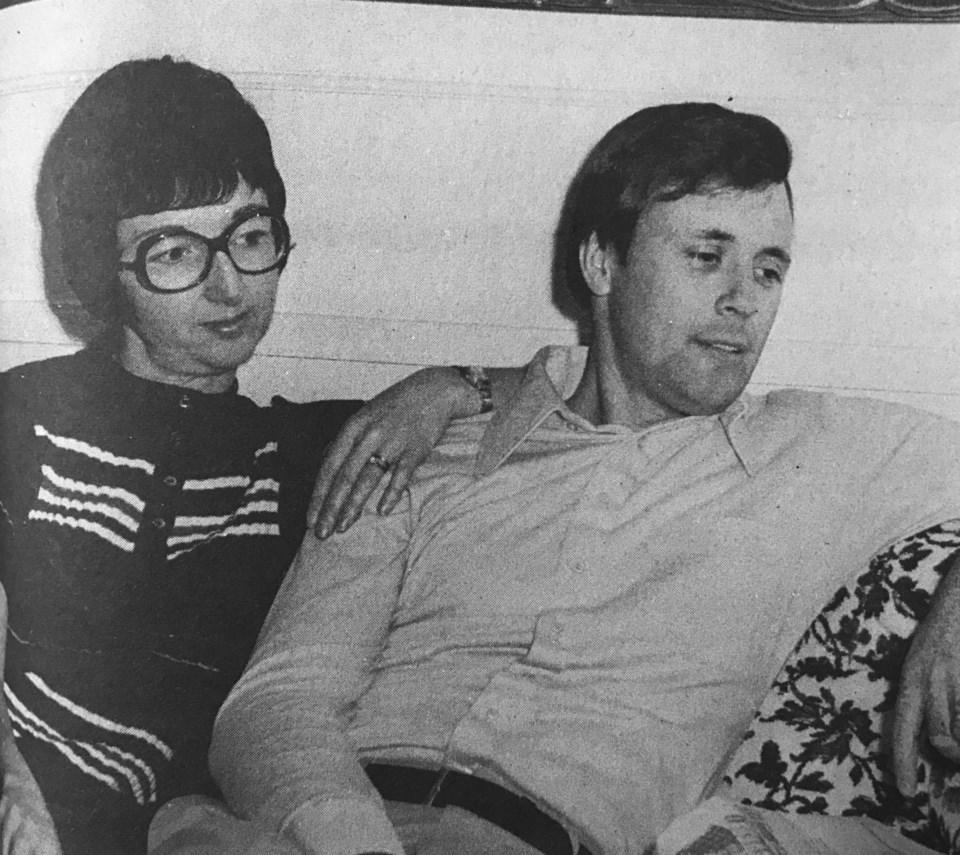 CP Air pilot Bob Pitcairn, shown in this file photo with his wife Kay, relaxes at his Delta home before flying out to Montreal to bring Flight 71 back to Vancouver. It was on that flight a few days earlier that Pitcairn cooly talked a man out of highjacking the Boeing 737.Delta Optimist file

Let’s head back to the December 1974 pages of Delta Optimist and check out the story of the heroic CP Air pilot and Delta resident Bob Pitcairn.

The 36-year-old calmly, cooly aborted the attempted Nov. 29 highjacking to Cyprus of the Boeing 737   jet he was piloting.

He managed to talk the highjacker out of taking the aircraft, which was flying from Montreal to Vancouver when the incident occurred in the skies over Saskatoon.

The highjacker was a naturalized Canadian of Cypriot origin at who had been holding a stewardess at knifepoint.

Pitcairn described the highjacker as “weird and distraught” as the suspect held the woman down at the rear of the plane.

Pitcairn calmly told the man the jet would need refuelling in Saskatoon and the suspect handed the knife over to the pilot once they landed.

Pitcairn said he then walked off the aircraft with the man and strode 150 yards to turn him over to awaiting RCMP, who, he said, had orders not to storm the 737.

There was also no panic by any of the 80 passengers.

Not only did Pitcairn walk off with the man, who boarded in Winnipeg, he also carried the man’s hand luggage for him and assured “we’d get his other luggage out of the hold for him.”

Joining CP Air in 1966, Pitcairn told the Optimist he first thought the highjacker was holding a hunting knife to the woman’s throat but it later turned out to be a CP Air dinner knife.

Passengers and crew all praised the pilot’s coolness during the ordeal.

He went to a meeting the next day.

Described as quiet, unassuming and a little shy, Pitcairn, also one of the country’s top marksmen, attended a two-day meeting of the B.C. Rifle Association which he chaired.

He was proposing an indoor rifle range for Delta at the time.